Uche Ogah and the ‘Promise of God’ 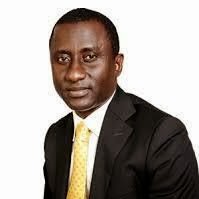 According to the Bible, God created man in his own image and I suppose that image should be the Spirit of God. In view of this, it’s possible to hear God when He speaks as long as you are in the spirit.

That was the case with Uche Ogah, a ‘born again’ Christian who was promised by God through some ‘men of God’ that he will become the Governor of Abia State in 2015.


Thus, Mr Ogah joined Peoples Democratic Party (PDP) to realise the ‘promise of God’. But we've long known that he didn’t win the PDP primaries and from now, he’s out of the Abia gubernatorial election.

In that case, Mr Ogar will not be contesting the 2015 general election and will not become the governor of Abia State in 2015. By so doing, God will not be honouring the promise He made to Uche Ogah. And so I ask; why would God not honour His promise?

There was no doubt that God probably promised Mr Ogah that he will become a governor in 2015 since the signs were there. In Abia state, Ogah was and is still popular with the electorates. He’s rich and can bankroll his election campaign. He’s educated and intelligent, and so on. But, did God promise Uche that he will become a Governor through PDP?

Surely, those ‘men of God’ that got the message from God can’t testify that He asked Uche to join PDP in order to realise the promise.

I totally believe that God can speak to men; however, man may not be able to properly digest the message contained in God’s words. And that is why Paul wrote in Romans 12:6; “we have different gifts, according to the grace given to each of us. If your gift is prophesying, then prophesy in accordance with your faith”.

And so, Mr Ogah ought to have sought the interpretation of that prophecy from those with the gift to interpret dreams and prophecies. Moreover, Joseph who had the gift of interpreting dreams was brought to interpret Pharaoh’s dream when all the magicians failed.

Besides, sometime ago and considering the political atmosphere in Abia state, I wrote a post called Masters Energy and his Strategy. In there, I elaborated the reasons why Uche must move to another political party to achieve his ambition. Obviously he didn’t take that advice as I am probably not a ‘man of God’.

All the same, it’s possible that God didn’t promise Uche Ogah that he will be a governor in 2015; rather it was an idea of a hallucinating ‘man of God’. For instance, we have not forgotten when Rev. Chris Okotie told the whole world that God has decreed that he will become the president of Nigeria.

Overall, please God forgive Uche Ogah for not listening to your instruction if you actually made that promise to him. I say this because heaven and earth shall pass away but your words shall not pass away. By his (Ogah) disobedience he has made it look as if God doesn't keep to his promises.
Labels: Politics Religion