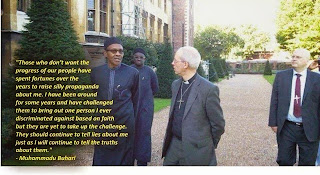 Muhammadu Buhari has been constantly accused of being a Muslim fundamentalist.

And he has always denied this accusation.

Furthermore, on his Facebook page, he stated the following. “Those who don’t want the progress of our people have spent fortunes over the years to raise silly propaganda about me".

"I have been around for some years and have challenged them to bring out one person I ever discriminated against based on faith but they are yet to take up the challenge. They should continue to tell lies about me just as I will continue to tell the truths about them”.

Well, I don’t know if those who call Buhari fundamentalist have taken up this challenge. If they haven't and are not willing to; let me then ask; why?

It further cited that Christian fundamentalists are those “[who believe] that every word in the Bible is divinely inspired and therefore true”; while those who favour “strict observance of the teachings of the Koran and Islamic law” are Muslim fundamentalists. Thus, every Christian and Muslim in Nigeria is a fundamentalist.

Besides, it is important to note that Christians sowed the seed of fundamentalism in the late 19th century when Protestants rejected the liberalisation and modernisation of some doctrines of Christianity.

However, those people who accuse Buhari of fundamentalism have also insinuated that he will Islamise Nigeria if he becomes President. How will Buhari Islamise Nigeria in a democracy if he didn’t do it when he had absolute power as a military Head of State, and Tunde Idiagbon, his deputy then, was equally a Muslim? This is laughable.

For Buhari to Islamise Nigeria, he will have to forcefully convert all non-Muslims to Islam. And I wonder how he would possibly do that in this era of social media, such as Facebook, Twitter and so on.

Unfortunately, gullible Nigerians, who incidentally are in majority, have accepted this falsehood for a very long time. They are supported by corrupt Nigerian elites who have by their actions and inactions, led people to believe these falsehoods.

Though the above accusations may have contributed to Buhari’s presidential loses. But, the main reason lies with those elites I’ll rather call Christian and Muslim fundamentalists.

These fundamentalists will never be alive to see Buhari become President. These are the people that have used religion to perpetuate evil and corruption in Nigeria.

And as Buhari puts it; “they should continue to tell lies about me just as I will continue to tell the truths about them”. The lie is Buhari is a Muslim fundamentalist while the truth is that they are corrupt.

In addition, since they know what Buhari Presidency will become of them. They have done their utmost in the past to stop Buhari and will continue to do everything possible to stop him from becoming the President of Nigeria.
Labels: Politics