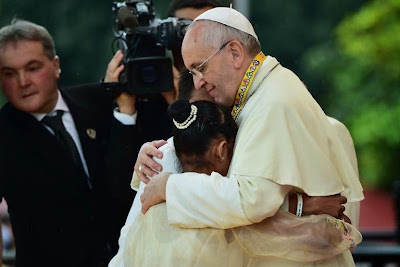 A few weeks back, Pope Francis made a Papal visit to the Philippines. In the course of some ceremonies at the Manila Catholic University, Miss Glyzelle Palomar, a 12 year old girl who was once homeless told the Pope; "Many children are abandoned by their parents. Many children get involved in drugs and prostitution".

And while weeping she asked the Pope; "why does God allow these things to happen to us? The children are not guilty of anything."

The Pope hugged her for a few seconds together with another 14 year old boy who was also once homeless. As we know and as it’s often said, sometimes ‘action speaks louder than words’.

Afterwards, the Pope replied her; "The nucleus of your question... almost doesn't have a reply." The Pope further told his audience that "she is the only one who has put a question for which there is no answer and she wasn't even able to express it in words but in tears."

At least the Pope was sincere in acknowledging that there’s no answer to the girl’s question. If it had been one of those money changers that call themselves Pentecostal Pastors; they would have manufactured an answer for the girl and still reference the bible.

In fact, for a 12year old girl to summon courage and ask the Pope such a question; she must have been battling with a lot of doubts in her mind, especially the doubt about the existence of God. She must have asked God in her prayers; why do you allow adults to force us into prostitution. What have we children done to deserve all these treatments?

Well, perhaps God answered her prayers by sending the Church Charity to rescue her from the streets; after all; there were other kids in the street that weren't rescued with her. She may not have seen it that way and so, when the rare opportunity of meeting the Pope came; she seized the moment to ask the Pope the same question that has been bothering her mind.

Unfortunately for her, she didn’t get an answer from the Pope and I suppose her doubts will continue.

Let me, furthermore, ask; why would God allow these social vices to be forced on the children Jesus told his disciples that “…the Kingdom of God belongs to those who are like these children” – Luke 18:16.

Clearly, Jesus meant that children are blameless just like Miss Palomar told the Pope; “the children are not guilty of anything." And thus, it is only God that knows why.

Anyway, in the bible, similar question and answer happened between Jesus and his disciples. His disciples asked him, “Master, who did sin, this man, or his parents, that he was born blind? Jesus answered, neither hath this man sinned, nor his parents: but that the works of God should be made manifest in him” – John 9:2-3.

And thus, Miss Palomar; take consolation in the answer Jesus gave to his disciples and perhaps, your ordeal occurred so that the works of God will manifest in you.

However, consider the following statement; and the dialogue that came thereafter: ‘it is not the intention of God that man should die.’

Question: then why does man die?
Answer: man dies because man sinned.
Question: but the God who created Heaven and Earth knows everything; didn’t He know that man will sin before he created him?
Answer: well, no further answer; as anymore response will amount to telling all that God is no longer Omnipotent, Omnipresent and Omniscient.

Anyway, in my religion, Ome N'ala Igbo (Igbo Traditional Religion) we believe that God is all knowing. And so, He knew that man will sin and therefore; He knew that man will die. Since God knows everything, if He had wanted, He could have stopped man from sinning. As He didn’t; that explains the Heaven and Hell Christianity talks about.

Nevertheless, in RIT, every question is answered; hence, you are all welcome.

Finally, an Indian/British writer named Salman Rushdie was born a Muslim. He had a lot of doubts about his Islamic religion that he decided to put them together in a book, which he called the Satanic Verses.

Ayatollah Khomeini of Iran issued a death warrant on him. And Mr Rushdie went into hiding but responded to Ayatollah from his cocoon; “Faith without doubt is addiction”.
Labels: Religion