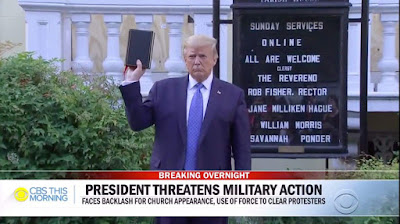 I have often wondered why there are so many denominations of Christianity even though their practices are supposedly based on Jesus’ teachings.

If Christians, in my opinion, have good intentions of propagating the teachings of Christ, then, there should be one Church with different branches rather than different Churches with one branch. In so doing, the theme of Christianity will be harmonised.

However, there are different churches due to what I describe as; ‘a holy book – a diverse interpretation’. This stems from the fact that men see things from different perspectives. These perceptions form an individual ideology.

And once an ideology is formed, it is then sold as a doctrine to those people who are willing to be convinced or deceived. The ideologist will see no other reason but his. And hence, any ‘believer’ that swallows his philosophy hook, line and sinker becomes a willing tool of coercion.

My caption (a holy book – a diverse interpretation) is not only limited to Christianity. Other major religions of the world (Judaism, Islam, Hinduism etc.) all have different sects but one holy book.

Nonetheless, in order to simplify this write-up, I will rely on the 3 Abrahamic religions; Judaism, Christianity and Islam.

Well, it all started on Mount Sinai, where Moses received the 10 commandments to when Israel was overseen by the Prophets. The laws of Moses and the teachings of the Prophets became the way of life/religion of the Jews that is known today as Judaism.

But when the Romans came to Jerusalem, despite the fact that they met a religion (Judaism); they tried to force a new ideology called Christianity on the Jews.

The Jews have always protected their religion to the extent that they were sceptical about Jesus’ mission. Christ, a Jew himself reassured his people in Matthew 5:17; “do not think that I have come to abolish the Law or the Prophets; I have not come to abolish them but to fulfil them”.

In other words, Jesus neither abolished Judaism (Law and the Prophets) nor created a new religion, which means he practiced Judaism. And so, those people who claim that Christianity means – Christ-like should be practicing Judaism - the religion of Jesus.

Anyway, the Jews turned down the new religion and an ideological war ensued. Their decision to stick to their way of life bestowed to them by Moses and the Prophets while rejecting the Roman ideology (Christianity), robbed them of their liberty.

They were conquered, dehumanised and dispersed around the world. The Jews still suffer pockets of anti-Semitic attacks till date. The ideological war against them has not ended.

Likewise, Prophet Muhammad practiced Christianity (Roman Catholic Church) before he saw some assumed flaws with the religion. He saw the style of worshipping by the Catholic Church as idol worshipping and so, he formed a new religion based on his ideology, which he called Islam.

Islam opposed everything that the Roman Catholic Church stood for. It didn’t like the idea of worshipping Jesus on the cross, Virgin Mary and Jesus as the son of God or God himself etc.

And thus, Prophet Mohammed’s perceptions formed the doctrine of his religion upon which his followers must abide. He also introduced punishments to check those who would go against the rules.

Prophet Mohammed has died years back but his ideology lives on and so do the misgivings that came with it. For instance, Koran 10:94 states; “So if you are in doubt, [O Muhammad], about that which We have revealed to you, then ask those who have been reading the Scripture before you. The truth has certainly come to you from your Lord, so never be among the doubters”.

Invariably, the existence of this verse in the Koran suggests that Muhammad after all was human and had his doubts. It could be doubts about his ideology or the message given to him by the ‘Lord’. And by referring him to the people of the scripture (Jews and Christians), underlines the superiority of the Jewish Law and the Prophets (Judaism).

It is obvious that the Islamic terrorists have created their own ideology out of Prophet Mohammed’s. These terrorists from al-Qaeda to ISIS and Boko haram have ideological differences yet they are all Moslems; and there will be more terrorists fashioned from Islam after them.

And therefore, those people who accuse the President of Nigeria (Jonathan) of not having the will or zeal to defeat Boko haram should note that America with its military sophistication is yet to win the war on terror. So long as there is an ideology there will always be a war.

However, if Buhari wins the Nigeria Presidential elections and ends Boko haram insurgents within 3 months like he assured, it will then be confirmed that Boko haram is a Northern tool to frustrate the administration of President Jonathan. On the other hand, Buhari should understand that ideological wars are wars without end.

By the way, there are few people (Atheists) whose ideology is; there’s nothing like God. They claim that a ‘big bang’ created the world. Yeah; but something should have caused that ‘big bang’ going by Newton’s 3rd Law (“for every action, there is an equal and opposite reaction”). Therefore, if the reaction of a ‘big bang’ = earth; then the action that caused the ‘big bang’ =? Until we know, let’s call it God.

Finally, I watched a video where members of Boko Haram were executing their captives. One of the prisoners was persistently shouting Allahu Akbar (God is Great) and ironically, his killer was also shouting Allahu Akbar. Only God knows who He will answer.
Labels: Politics Religion