Obama and Buhari: End of their Marriage of Convenience 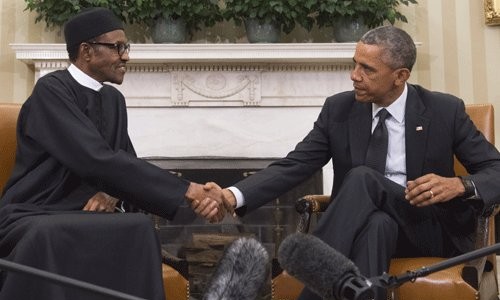 A few weeks ago, Pres Buhari’s in-law was alleged to have collected money from some businessmen to facilitate a meeting between them and the President. But Buhari considered that act as bribery and immediately ordered the arrest of his wife’s brother.

But in America that process is not considered a crime, rather it is known as lobbying. And lobbying was how Buhari and his political party (APC) paid David Axelrod his professional fees to get Pres Obama to support Buhari during the 2015 presidential election.

However, the presidential election has been won and lost but it is very obvious that Buhari and APC are yet to come to terms that they won that election. They are still engrossed in those scams that gave them the presidential victory.

The APC scam before the election was a hurriedly arranged meeting at the Chatham House in London, UK, to project the non-existent political profile of Buhari. And after the election; it was the recent make-believe reception at the White House by Obama.

Furthermore, Mr Axelrod got Obama to allow Buhari to stay at the Blair House in the US. And the APC propaganda once more started filling the airwaves; Buhari is the only African President to be housed at the Blair house etc, etc.

In other words, the propagandists were trying to tell Nigerians that their President is very much loved by Pres Obama. And if that’s the case; what did Obama give to Buhari to return to Nigeria with?

Apparently, Buhari’s main request from Obama was some weapons to fight Boko Haram. Well, everybody thought Buhari's request would be met since Obama has persistently spoken about how he will help Buhari fight terrorism in Nigeria.

Hence, it is expected that Obama would give Buhari a silver bullet that has Boko Haram written on it, which Buhari will use to miraculously wipe out Boko Haram in Nigeria.

Unfortunately, Buhari came back to Nigeria empty-handed. Obama didn’t even give a firecracker to Buhari. Obama cited Leahy law, which prevents the US from selling arms to countries whose military have poor human rights records.

And therefore, how does Obama plan to assist Buhari to fight Boko Haram if he wouldn’t sell arms to Nigeria? Although he pledged $5 million to the multinational force fighting Boko Haram in Africa; but what would the money do if Nigeria cannot buy arms with it?

Now, what did Nigeria gain from the resources wasted on Buhari’s forgettable visit to America? Regrettably, Nothing! On the other hand, what benefit was it to Obama to invite Buhari to America? To enable David Axelrod concludes the job that he has already been paid for.

And the red-faced Buhari, who may have all the while believed that he was genuinely loved by Obama, has now realised that no matter what; America has no permanent friend or enemy but permanent interest.

Then, to add salt to injury, Obama abandoned his visitor (Buhari) in the US for his scheduled visit to Kenya and Ethiopia. This further lay credence that Buhari’s visit to Obama was never part of Obama’s agenda but just to accommodate Axelrod's interests while satisfying APC propaganda machine.

Out of frustration and realisation that the cookies have crumbled, Buhari started making unguarded statements. First, Buhari was asked if he will run an inclusive government. Initially he conferred with the moderator who explained to him what ‘inclusive’ meant.

To summarise his response, Buhari replied that he’ll favour those areas that gave him more votes during the election. But when he realised the implication of what he was saying, he tried to vary his statement. But before then he has already spoken his mind.

Besides, before he left the US, Buhari known for his tactless remarks threw in his last gaffe. He accused Obama and the US of indirectly supporting Boko Haram for not selling arms to Nigeria to crush the insurgents.

However, the criticisms that greeted Buhari's statement prompted his media adviser (Femi Adesina) to deny the statement. How can anyone try to deny or explain away a recorded statement? It is either Buhari doesn't understand what he says or the people don't understand him.

In summary, Senator Patrick Leahy, the man that Leahy law was named after simply responded thus; “... [Buhari] should face up to his own responsibility to effectively counter Boko Haram.”

With that kind of statement from Leahy, APC and Buhari should know that their marriage of convenience with Obama has ended. More so, it is high time they end their propaganda and face governance.
Labels: Politics