Pres Buhari: Carrying the Weight of Nigeria alone or Running a Secret Government? 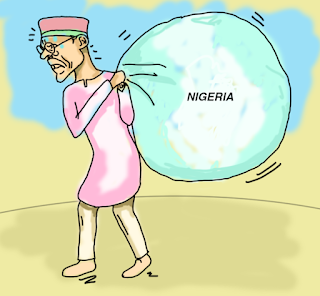 It has been 6 weeks since Muhammadu Buhari was sworn in as the President of Nigeria. And up till now he is yet to name his cabinet.

His inability to form a cabinet was attributed to, and according to him, taking his time to gather the best hands and perchance, find any non-corrupt Nigerian that he will work with.

This is necessary since Pres. Buhari is the 'best hand' and the only 'incorruptible' Nigerian dead or alive to govern Nigeria.

Incidentally, Buhari is yet to publicly declare his assets as he promised during the presidential campaigns.

More so, the delay is hinged on the reason that he doesn’t want a situation where he will have to hire and fire his ministers for lack of performance and may be corruption.

Anyway, his media adviser recently said; Pres. Buhari is aware that it is a constitutional requirement to appoint Ministers; nevertheless, he noted that the same constitution didn’t state a time-frame to it.

However, he concluded that the president will appoint his ministers when he has cleared the mess left behind by the former administration.

Now, is Pres. Buhari doing the clean-up alone? Obviously he is working with some people going by his records at Petroleum Trust Fund (PTF) when he used some consultants to run that government agency.

And so, who is he working with now? Let’s recall that Pres. Buhari rushed and secured approval for the appointment of 15 advisers from the last Senate, headed by Sen. David Mark.

Moreover, he has only confirmed to Nigerians that Mr Femi Adesina, his media adviser, is one of those approved 15 advisers.

Thus, who are the remaining 14 advisers? Don’t Nigerians have the right to know those who are paid with their taxes?

Perhaps, the other 14 advisers are northern Hausa/Fulani people as usual. And considering the uproar it might raise, the President has decided to keep their names secret.

Even Buhari himself accepted that at his age there are limits to his performance. And therefore, who are the people filling up Buhari’s inadequacies?

I believe that Nigerians should be told who they are; unless that Pres. Buhari is running a secret government, which in my opinion; that’s what he’s doing?

Pres. Muhammadu Buhari is not carrying the weight of Nigeria alone.
Labels: Politics