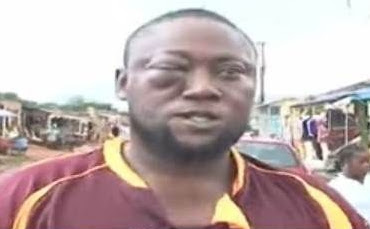 Mr Obama (US President) through his representative in Nigeria stated that he will continue to persuade, perhaps force, the government of Nigeria to rescind its law against same-sex marriage.

According to Obama, the law that prohibits same-sex marriage is discriminating and thus, violates the human rights of gays and lesbians that reside in Nigeria.

Talking of human rights, unfortunately, none exist in Nigeria. Everyday, Nigerians face brutality in the hands of the police, the military and other security personnel.

For example, Mr Jerry Guobadia (Pictured above) was mercilessly beaten by the Nigeria police because, according to them, he has too many tattoos on his body. That’s human rights violation.

Most Nigerians are locked-up in police stations and prisons for months/years without trial. And those who cannot afford to bribe the police to regain their freedom remain there until they are miraculously released. That’s human rights violation.

Moreover, the former Chief security officer (CSO) to former Pres Jonathan is currently being held by the Nigerian secret police in an underground cell, on the orders of President Buhari.

The CSO has been held in the underground cell for the past 5 days and without charges while he’s being tortured on daily basis. That’s human rights violation.

And so Mr Obama; the human rights violations that occur in Nigeria is countless. As such, you’ll agree with me that the prohibition of same-sex marriage will appear last on the scale of preference of majority of Nigerians.

In other words, Nigerians would want to see their human rights violations, such as the beating of Mr Guobadia, attended to before considering the rights of the minority (homosexuals).

In addition, Africans don’t need aids from Europe and America; rather they want you to stop accommodating Africa stolen wealth that ends up in your financial institutions.

Besides, these funds are equally recycled within your system and loaned out to your small and medium enterprises (SME). And these SMEs will grow in profits and pay taxes, which will form part of the supposed aids that you give to Africa.

Clearly, when these supposed African leaders steal the commonwealth of the people, they deprived them of their fundamental human rights.

I mean their human rights to basic healthcare, education, in fact access to those basic things Europeans take for granted are thereby taken away from them.

As the case may be, when you look the other way and allow your financial institutions accept these funds like you always do, you become an accessory before the fact.

Now, let me make myself clear, I don’t have anything against homosexuals; but I detest a situation where the western countries present same-sex marriage as the problem facing Africans. That’s the least thing on our minds.

However, from the utterances of Obama’s representative in Nigeria, it is apparent that the abrogation of the law against same-sex marriage will certainly be at the centre of the Washington discussion.

As you prepare to meet with Pres Buhari in Washington, Mr Obama; consider our Africa cultural heritage before you force down same-sex marriage down the throat of Pres Buhari.

And as a Christian, you should remember what Jesus was quoted to have said in Matt 19:4 “Have you not read that He who made them at the beginning made them male and female.”

As for you Pres Buhari, before you swallow Obama’s same-sex marriage being forced down your throat, remember as a Moslem what Quran 26:165 says about homosexuality: "What! Of all creatures do ye come unto the males, and leave the wives your Lord created for you? Nay, but ye are forward folk."

Finally, Mr Obama, it will be discriminating on its own if you campaign for the human rights of the minority (homosexuals) and fail to do the same for the majority of Nigerians and most Africans that suffer daily.
Labels: Life