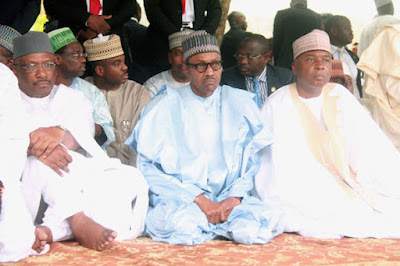 Going by newspapers headlines of today, it appears that President Buhari has set in motion the process to fully Islamize Nigeria.

Most front-line newspapers, ThisDay in particular reported that Pres Buhari “has urged the Federal Ministry of Education to include two Islamic Studies books written by the late Justice Sambo in the secondary school curriculum for all Federal Government Colleges”.

With the above statement from Pres Buhari, all the internet warriors have been busy commenting on what they considered as a prelude to Islamize Nigeria.

To be honest, when I initially read the news, I didn’t notice anything to suggest that Buhari is trying to Islamize Nigeria.

However, following the buzz on the internet, I returned to read the news again to determine why everyone is complaining.

Now, looking critically at Pres Buhari’s statement, the confusion and suspicion lie where he says that the two Islamic books should be for all Federal Government colleges.

And that suggests that the Islamic books should also be available even in the federal government colleges where the majority of the students are Christians; such as the South-East and South-South zones of Nigeria.

But Islamic studies like Christian religious knowledge are already included in the secondary school curriculum. And no student has ever been forced to study either of the religious studies.

And so, why are the newspapers reporting the President’s statement as if Buhari is going to force anyone to study Islamic studies?

I believe Pres Buhari was only advising the Ministry of Education to update the secondary school curriculum that relates to Islamic studies with the 2 books written by the late Justice.

Thus, the books should be available to the Islamic students irrespective of where their colleges are situated.

Really, if not because of the mistrust in Nigeria, this information shouldn’t have made it to the news-stand.

And in my opinion, for these newspapers to report this irrelevant news shows that they may be unhappy with President Buhari and perhaps, gearing to undermine him.