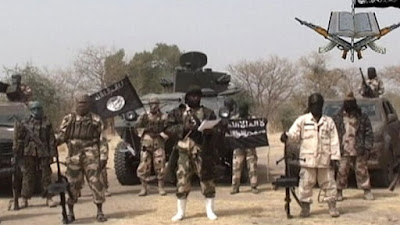 But, after becoming the president of Nigeria, Buhari has stated that he would negotiate with Boko Haram, however, with the caveat that only if the genuine Boko Haram leaders are identified.

With that statement in mind, Buhari is supposedly telling Nigerians and the world that he doesn’t know who Boko Haram leaders are and by extension their members.

And if Buhari’s assertion is correct; then, who are the members of Boko Haram that he is pledging to defeat by December, 2015?

However, it should be noted that during the administration of Pres Goodluck Jonathan, Boko Haram nominated Buhari to represent them in the failed proposed negotiation with the government.

Although Buhari turned down the nomination at that time; now, is it possible that there is a behind the scene negotiations between Buhari’s government and the members of Boko Haram that nominated him as their representative?

And perhaps, that is why Pres Buhari is confident of defeating Boko Haram by December 2015. In other words, it could be that Boko Haram terrorists have shown the willingness to abandon their campaign of terror in exchange of goodies from Buhari’s government.

In my opinion, therefore, an offer similar to Niger-Delta Amnesty Programme would be part of the reward to be extended to Boko Haram if they accept to abandon terrorism.

And in preparatory to the reward to Boko Haram, Buhari has appointed Brigadier-General P.T. Boroh (rtd.) as the Coordinator of the Amnesty Programme for former Niger-Delta militants. This is to ‘strengthen’ the failing Niger-Delta Amnesty Programme so that he will not be accused of nepotism when that of Boko Haram comes on board.

Nevertheless, if the above scenario is not what it is, then, how can Pres Buhari be sure to defeat, in 4 months, the same Boko Haram members he claims that he doesn’t know? And so, who is he fighting against?

Well, Boko Haram is fighting guerrilla warfare against the government of Pres Buhari. But in this kind of conflict, the enemy is unknown.

And in the case of Boko Haram, their potential soldiers are virtually every male in flowing gown (Agbada) that resides in North East of Nigeria. They also include, as of recent, women in burqa and brainwashed underage girls.

Moreover, in the history of religious terror campaign, no country has ever claimed to have eradicated terrorism. Even Europe and the US, with their intelligence gathering and technology are still fighting war on terror.

In addition, in the Middle East, Israel is still fighting war on terror. In fact, Middle East is synonymous with terrorism. Islamic State (ISIS) is in control of part of Syria and Iraq etc. So, how does Buhari think that he can eradicate Nigerian terrorism in 4 months?

Anyway, the only means Buhari will be sure of the demise of Boko Haram by December is to wipe out every potential member of Boko Haram in the North East of Nigeria. They will include every woman in burqa and teenage girls.

After all, that was the system the federal troops adopted in Asaba during the Biafra war. In Asaba, they massacred every male in sight since they couldn’t differentiate who was and wasn’t a Biafra soldier.

But that method is unacceptable in the world of today. And hence, the only way Pres Buhari can be sure of ending Boko Haram insurgency by December 2015 is by negotiating with them.

And I believe Buhari is already discussing with Boko Haram. After all, there were leaders of Boko Haram who nominated him to negotiate on their behalf with the administration former Pres Jonathan.
Labels: Politics