Adhering to the doctrine of men: The deaths in Mecca, Saudi Arabia 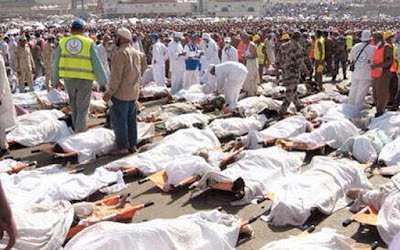 It was dinner time when I visited the hospital to see my wife and our new born baby. The household staff was serving the mothers their meals when a Jewish woman politely asked; do you have any kosher meal?

The staff replied; I am sorry we have served all that we have. The Jewish woman then enquired; do you have any Halal meal? The answer was yes, hence, she requested to have the Halal meal instead.

As she ate her Halal meal so I pondered away. Now, kosher foods are those prepared in line with the requirements of Jewish law; while Halal is prepared in accordance with Islamic laws.

Moreover, a few years later while in a shopping mall, I saw some women in Hijab having their meal in a Jewish restaurant. And immediately, the image of the Jewish woman eating Halal meal in the hospital resonated.

Thus, I simply asked myself, if a Jew is allowed by Jewish law to eat Halal meal and a Muslim is allowed by Islamic law to eat kosher meal; then, why do they fight themselves? The answer is - adhering to the doctrine of men.

It is pertinent to note that adhering to the doctrine of men is why there are many mishaps and wars/destructions in the world of today. And these wars are caused by the followers of the ‘men of God’ mostly amongst the 3 Abrahamic religions – Judaism, Christianity and Islam.

These 3 religions can trace their common heritage to Abraham and they equally base their doctrines on the commandments Moses supposedly received from God.

Surprisingly, Moses commandments have similarities with the ‘42 Laws of Maat’, which was practiced by Egyptians before Moses was born in Egypt. And Moses equally received the 'commandments from God’ at Mount Sinai, which is also in Egypt.

But Jesus seemed to have differed from Moses in this regard as I noted in Matthew 15:9 (“But in vain they do worship me, teaching for doctrines the commandments of men”).

Perhaps, the commandments of men stated by Jesus could impliedly refer to the Mosaic Law, which was too sacrosanct to the Jews.

However, if Jesus’ intention was to dissuade men from adhering to the doctrine of men, then, he didn’t succeed.

Unfortunately, as soon as Jesus left the world, Christians started worshiping him and his mother (Mary) as god and mother of god respectively. Another doctrine of a man called Pope; the head of Roman Catholic Church.

Meanwhile, the Jews are more than ever holding on to the commandments of Moses.

But another man by name Prophet Mohammed started his own thing called Islam. He believed that Judaism and Christianity were not worshiping God but adhering to the doctrines of men.

Yet, Prophet Mohammed ended up creating his own doctrine, which must be strictly adhered to by his followers. He created a compulsory 5 pillars of Islam of which pilgrimage to Mecca was one of them. 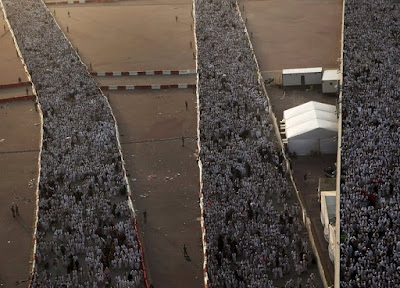 And so, every year Muslims faithful gather in Mecca, Saudi Arabia to obey the Prophet’s order. And one of the rituals of the Mecca pilgrimage is the stoning of the devil at Mina near Mecca.

All these hajj mishaps were caused by stampede. So, what caused the pilgrims to stampede? The Saudi authorities have constituted an investigative team to unravel the cause.

As for animals, they stampede when they are panic-stricken. Could it also be that the cause of the stampede was because the pilgrims panicked?

And since every mishap is blamed on the devil by the Abrahamic religions (Judaism, Christianity and Islam), the stampede in Mecca may have also been caused by the devil.

Perhaps, the devil decided to fight back after all the centuries of stoning.

All the same, irrespective of what caused the Mecca stampede, I believe the world will be a better place if humans would reject the doctrine of men and follow the WILL of God.

I extend my sincere condolences to the families of those that lost their lives. May God grant them the fortitude to bear their losses!
Labels: Religion