First, let me introduce Mr Adam Oshomhole, the governor of Edo State of Nigeria. Adam is an ugly 63 years old short man but he is rich. Recently, he married a new Eve who is young enough to be his daughter.

Adam is not only lucky that he caught his Eve young; he also claimed that he was the first man that she offered her apple to. This modern Adam is damn lucky to have found and married a 'virgin' who is in her 20s; a feat that has made it easier to find a ‘needle in a haystack’. 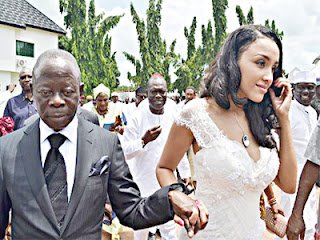 So, what could have driven a virgin into marrying a short and ugly 63 year old man who is older than her father? Is it money or fame or love?

The answer will eventually reveal itself after January 2016 when Adam seizes to be the governor of Edo State.

Meanwhile, here are highlights of what happens when an ugly old man marries a beautiful virgin.

Paranoid:
As an ugly old man, Adam must be conversant with the lyrics of that famous song by Dr Hook - "When You're In Love With A Beautiful Woman" 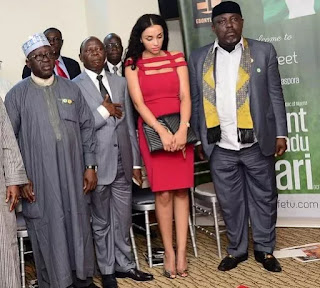 And thus, when Adam was asked by Pres Buhari to be part of his entourage to see Pres Obama; Adam was the only man that took his wife along. Even Pres Buhari who equally has a beautiful wife didn’t travel with his wife. Well, that’s confidence. And for Adam; that’s paranoia.

Why wouldn’t he be (as an old ugly man with a young wife) especially in this world that trust has lost its trust? Moreover, he will need to impress the young wife that he is connected to the high and mighty. And perhaps, introduce her to Obama. But unfortunately that wasn’t possible because in America there’s no room for frivolities.

Toughie
Having shown signs of paranoia, the ugly old man must improve his image by showing his young wife that he is a tough dude. And that’s what Adam has been doing since he came back from that American trip. He has been unnecessarily lambasting the former administration of Pres Jonathan.

Adam started by saying that US officials gave them a list of corrupt Nigerian officials that have stolen the country dry. He said in that list was an official that stole $6 billion from Nigeria. But America has since denied ever handing over any list to Adam Oshomhole and co.

But when his American propaganda unravelled, Adam practically accused Mrs Okonjo-Iweala, the former Finance minister of corruption. For the last few months, he has been reeling out unsubstantiated figures that he claimed that Okonjo-Iweala mismanaged/stolen.

I wonder why Adam could accuse anyone of corruption when he takes more than US$2 million from his state’s coffers as security vote every month. And he doesn’t give account of how the money was spent. When a government official spends money without accountability; it’s corruption.

Anyway, Adam, everybody knows that you want to appear as a tough dude before your virgin-Mary wife. But please don’t malign Ngozi Okonjo-Iweala trying to achieve that. Okonjo-Iweala is a woman of integrity, a renowned economist and a former World Bank vice president. She is no match to a little mind like Adam Oshomhole.

Obviously the international community didn’t believe Adam’s corruption accusation against Okonjo-Iweala. If they did, GAVI, the Vaccine Alliance founded by Bill Gates wouldn’t have asked the woman to join its board. In addition, US investment bank, LAZARD has asked Mrs Okonjo-Iweala to join its sovereign advice division.

Adam, I know it’s hard ‘when you are in love with a beautiful woman’ especially if you forgot to take your Viagra the previous night.

In all, you are advised to always remember to take your medicine; with that you may not have to prove your toughness to your young wife in order to remain viable. And that may also help to reduce your paranoia.
Labels: Life