Africans and Christianity: The Elephant and the Rope 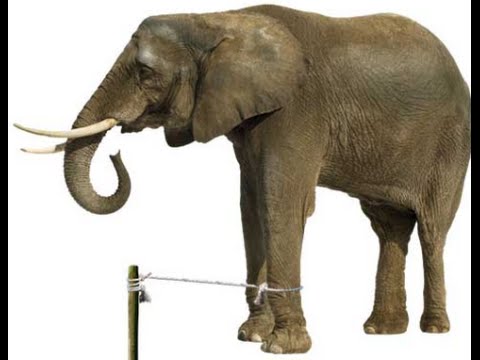 I believe most people have heard about the story of the Elephant and the rope: here’s the story. A certain man saw an elephant tied with a tiny rope to its front leg.

The trainer explained; “when they were very young and much smaller we used the same size of rope to tie them and, at that age, it was enough to hold them. As they grew up, they were conditioned to believe they cannot break away. They believe the rope can still hold them, so they never try to break free.”

This story is exactly how Africans are being held by Christianity. Like the Elephant was brainwashed into believing it cannot break away; so do Africans believe that if they stop believing in Jesus as their lord and personal saviour they’ll end up in hell fire.

Moreover, even though it is visible that the Elephant is not being held anymore; the damage to its ability to liberate itself was done when it was a baby. The same thing happened to Africans. Theirs was done when the Europeans arrived with their religion – their version of Christianity.

According to Johann Von Goethe, 1749-1832, “the only means to gain one’s ends with people are force and cunning. Love also, they say; but that is to wait for sunshine, and life needs every moment.” That was exactly how Christianity was foisted on Africans.

In his book, ‘Concept of Deity’, Dr John H Clarke wrote; “to hold a people in oppression you have to convince them first that they are supposed to be oppressed”.

This conviction can be achieved by force, cunning or love as noted by Goethe. In the case of the Elephant, it is obvious that the big animal was convinced by force. As a baby it tried to free itself but couldn’t and so decided to accept the situation as an adult.

As for Africans, the Europeans cunningly imposed Christianity on them. According to Dr Clarke; their method was first to laugh at the God concept of Africans. Then, they make Africans laugh at their own God concept.

Thereafter, the Europeans didn’t have to build jails to hold Africans as they now have “a jail more binding than iron can ever put anyone”. No one needs to put chains on their bodies to hold them, because the chains are in their minds. Just like the adult Elephant.

To buttress Dr Clarke’s reasoning; there was nothing wrong or imperfect about our African religions. Everything was perfect until the Europeans told our forefathers that our religion was imperfect and by extension - we as a people are imperfect.

However, if African religions were evil as they made it out to be, what is imperfect about our African names? Again, African names were meaningful until we were told that they are meaningless.

For instance, the name of my great-granduncle was Nwachukwu. This IGBO name literally means ‘child of God’ when translated into English language. But since Nwachukwu is a name given to only male-children, the actual translation into English therefore, is ‘son of God’ – not that of Jesus.

Now, Chukwu or Chineke is the name of God in the IGBO language version of the Christian bible. In IGBO language, CHI means God while UKWU means big or great. Therefore Chi-Ukwu translates – the ‘big or greater God’. CHI-NA-EKE simply means the God that creates.

Yet, when my great-great-grandfather (his name was Okwonma) named his son Nwa-Chukwu (son of God) never saw the Europeans and never knew there was something like Christianity. In other words, African names were meaningful and are still meaningful.

This also suggests that before the Europeans brought their version of Christianity to our village, my forefathers worshipped CHI-UKWU the greater God who we believe resides in heaven. OKWONMA even dedicated his son (Nwachukwu) to that God in heaven.

By the way, my grandfather was converted to Christianity and baptised and changed his name from Nwubani to Wilson. By the time he realised that it was a scam, he went back to his African (IGBO) tradition; changed his name back to Nwubani. And I thank God for his vision otherwise I would have been answering Wilson today.

Once more, if African religions were evil like they made us to believe; what was wrong with our African languages?

Let me share my experience during my primary education at a primary school located in my village. Our teacher informed us that we will be taught in English language. Then she said every one of us must speak in English and that speaking of vernacular in the class will not be tolerated.

From that moment the classroom became less noisy because even though we could understand a little bit of her English but speaking the language was a big challenge.

Then, one day, the teacher caught 2 boys conversing in IGBO language. The teacher was furious. I told you not to speak vernacular in this class… the boy responded in IGBO – I didn’t speak vernacular; I am speaking IGBO.

It was pathetic. That was the kind of confusion the British colonialists instilled in our people. We couldn’t understand why out of a sudden we were no longer allowed to speak our IGBO language. And our teacher was from our village.

The British colonial masters changed our religion, our names and our languages. Did they have to change our names and languages in order to give us a perfect religion that will take us to heaven? No!

They changed our ways of lives to dominate us than showing us the way to heaven. And as noted by Dr Clarke; “nothing the European mind ever devised was meant to do anything but to facilitate the European's control over the world”.

And till today, just like the Elephant, Africans wouldn’t attempt to break free from mental slavery even though they could. Like Fela Kuti (renowned African musician) said, our colonial masters have released us but we don't want to release ourselves.

It is very unfortunate that majority of Africans behave like the Elephant in this write-up. One such Elephant is Robert Mugabe. Mugabe is very vocal in criticising Europeans. But if he so resent them I think the starting point should be to give them back their names (Robert and Gabriel) and get himself a brand new African first name.

More so, in his rejection of homosexuality, Mugabe said ‘our lord Jesus Christ taught us that homosexuality is a sin’. Again, Mr Mugabe, Jesus Christ is Europeans’ property and not yours. If they told that Jesus condemned homosexuality and are telling you know that it’s al right – why argue with them?

Regrettably, amongst all the peoples of the world, it is only Africans that abandoned their ways of life for Christianity. From Japan’s Shinto to India’s Hindu and not forgetting Buddha in South Korea and other practices elsewhere in the world; they are prospering keeping to their beliefs.

On the other hand, there are Churches at every street corner of Africa, but our reward for that is poverty, diseases, war etc. Does it mean that God doesn’t hear their prayers? Of course the answer is yes; they are praying to the wrong God.

Thus, things have fallen apart in Africa since the centre can no longer hold according to Chinua Achebe. “Anytime someone say's your God is ugly and you release your God and join their God, there is no hope for your freedom until you once more believe in your own concept of the "deity." – Dr John Henrik Clarke