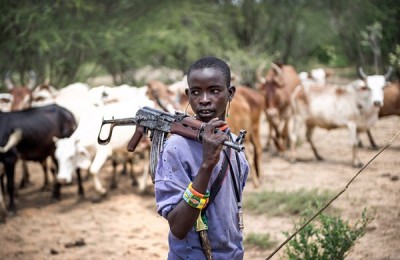 Fulani people are nomadic/pastoral ethnic group that spread across northern sub-Saharan Africa. Although there are now some settled or ‘town Fulani’ people, majority of them still move around with their herd of cattle, goats and sheep in search of food and buyers for their livestock.

In keeping to their tradition of cattle rearing, etc; the younger Fulani people tend to join the family business as early as 9 years old or even younger.

And that robs their children the opportunity to obtain formal education. The only exposure to the world other than their present settlement is the study of Arabic language and Koran – the offshoot.

However, Fulani people originally live around dry hinterlands (unoccupied territories) where they rear their livestock away from agricultural farmlands.

Due to this natural arrangement, in northern Nigeria for instance, communal clashes between the Fulani herdsmen and their neighbours in the North-East and North-West of Nigeria are seldom heard of.

Nevertheless, the north-central and the rest of southern Nigeria are faced with violence from the Fulani than the tranquillity they extend to their neighbours in the core-northern Nigeria.

As they move their cattle towards the south, partly due to the demand for beef by southerners, the Fulani herdsmen tend to abandon the natural understanding of keeping away their livestock from agricultural farmlands.

In fact, they deliberately allow their livestock to graze in people's farmlands. Hence, communal clashes between them and their host communities intensify. As a result, threatening the existence Nigeria as a country.

And in the need to protect their livestock, they acquire AK-47 assault riffles. The acquisition and possession of AK-47 and its likes are illegal in Nigeria; how much more openly displaying them.

Surprisingly, the authorities have not arrested these herdsmen that are in blatant breach of the law.

What makes the situation absurd is that the herdsmen don’t use their AK-47s to protect their cattle against lions or tigers – because the big cats are virtually extinct in Nigeria.

Rather, they use these AK-47s to kill farmers whose only crime is preventing cattle from ravaging their crops.

Apparently, the well-being of their livestock is more precious than the farmers’ lives. They rather kill the farmers than watch them prevent their herds from destroying their crops.

The recent massacre by the Fulani herdsmen occurred in Agatu, Benue state. More than 300 people were killed while several villages and farmlands were totally destroyed. But president Buhari, who himself is a Fulani, has remained silent to these atrocities.

Silence is golden they say but may be construe to mean tacit support in this regard. After all, on 13 October 2010 before Buhari became president, he led a Fulani delegation to threaten the then governor of OYO state on the alleged killing of his Fulani herdsmen whose cattle were destroying farmlands.

Meanwhile, Senator David Mark who incidentally is from Benue state has described the killings in Agatu as genocide against his people.

Well, if he can describe that as genocide, what will he call the massacre of over 2 million IGBO and Biafran people that he spearheaded as a military man during the Biafra war?
As a Christian that David Mark is, let me remind him what the bible says - ‘the measure you give is the measure you receive’.

Yeah! What goes around comes around.

I am not in anyway happy with what happened to Agatu people. But it’s worth highlighting what IGBO people have been suffering in the hands of those blood thirsty Fulani people.

At least the rest of the country is having a bite of their murderous pie. Ironically, these Fulani people that kill so much Nigerians are just 7 million people out about 170 million Nigerians.

Since Koran is the only gateway the Fulani herdsmen have with outside world and everybody knows what the Koran says about infidels. Perhaps, in their thinking; the blood of infidels is worthless compared to that of cattle.
Labels: Life