Nigeria’s Economic Recession: The Problem Has Only Started; Next Stop – Depression 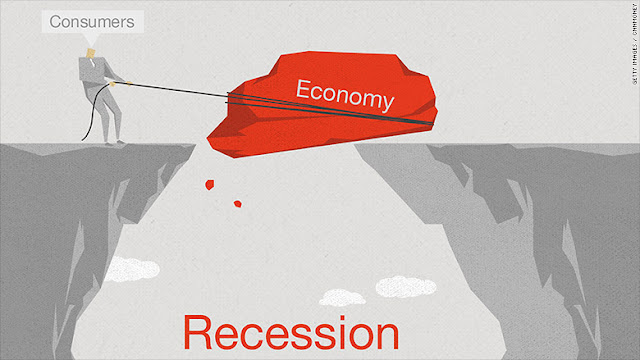 In 1964, the bankers’ magazine published an adage, which it rephrased as, "let me tell you about the law of holes: If you find yourself in a hole, stop digging." This came as an advice to financial services professionals, especially to traders on the floor of stock exchange around the world. The message was simply, if you are loosing money stop and reconsider your strategy.

However, in Nigeria their president (Mr Buhari) has found himself in a big hole and instead of him to stop and figure out how to exit the hole, Mr President is still digging. Now he has dug to a point that he dug up economic recession, which will eventually result to depression if Mr President doesn’t stop digging.

During the 2015 presidential campaign, Mr Buhari made a lot of promises which were hinged on a central theme – CHANGE. Apparently, recovering stolen funds from politicians was the option he had in mind through which he would raise funds to implement his promises. Since then, Buhari has realised that to recover stolen funds is not as easy as he thought. Moreover, Nigeria is still trying to repatriate Abacha’s loot several years after his death.

Unfortunately, other than recovering stolen funds, Buhari has no plan B on how to revive Nigeria’s economy. Hence the President and his lieutenants have resulted to blaming (as usual) the past administration.

Strikingly, the Finance Minister is the only person who has not blamed the past administration for Nigeria’s recession. Perhaps, she’s the only person in Buhari’s cabinet who understands the real meaning of economic recession – negative economic growth in 2 consecutive quarters. But is she freely allowed to do the job?

Anyway, recessions do occur even in civilised countries, not because their past leaders looted the country, but some Economists believe some recessions are inevitable and what causes them are inexplicable. It can only be checked by having proactive economic managers. However, when there is a total loss in business and or consumer confidence, there will be economic recession.

And so, if there’s a lack of confidence in the economy, companies will stop investing in their businesses. This will lead to layoffs and high unemployment, which in turn will reduce consumer expenditure.

And when consumers stop buying goods companies will further reduce production or relocate their businesses to other favourable climes, which will compound unemployment rate and create scarcity. Once there’s scarcity of goods and services prices will rise; money supply will increase and hence; Inflation. This cycle will eventually decline the GDP of a country and thereafter recession will occur.

As such, when Buhari was sworn in as the president of Nigeria, he didn’t present a clear-cut economic policy. Investors don’t like government silence otherwise they will form their own opinion.

The first sign of lack of confidence in the Nigerian economy was when Bloomberg reported that “JPMorgan Chase & Co. has excluded Nigeria from its local-currency emerging-market bond indexes tracked by more than $200 billion of funds, after restrictions on foreign-exchange transactions prompted investor concerns about a shortage of liquidity.” But Buhari continued digging.

IMF came asking Buhari to liberalise the Naira so as to create confidence that will make the desired foreign investors to consider coming to Nigeria. Buhari’s response was that he didn’t see the benefit of devaluation and so, he continued digging.

It is not clear if Buhari has stopped digging because he has not presented any detailed plan toward ending the recession. All that Buhari says is that by the grace of God the recession will soon end. And the market is watching.

Well, to end the recession, government must stimulate the economy so that companies must start producing again and consumers must start spending again. The process of stimulating the economy is for government to increase money supply (by reducing interest rates), increasing its spending and decreasing taxation.

Understandably, the finance minister announced that government will be releasing funds to execute its budget. Buhari’s government is used to deceiving gullible Nigerians, but they are also dealing with informed business people around the world. These people know that Nigerian government lacks the funds to finance any project at the moment, otherwise States of the federation won’t be owing salary arrears to their employees.

But excessive money supply leads to inflation, which literally means too much money chasing few goods. There’s excess liquidity in Nigeria at the moment caused by depreciating Naira. Thus, the central bank of Nigeria (CBN), instead of decreasing interest rates to stimulate the economy has in the recent time increased interest rate in the pursuit of taming inflation.

In fact, tight monetary policy (decreasing money supply) adopted by Paul Volcker, chairman of the US Federal Reserve, in trying to tame inflation led to the 1981 US economic recession. And that’s why I said Nigeria’s recession will lead to depression because the CBN has adopted the policy of Paul Volcker.

Perhaps that’s why HRH, Sanusi the Emir of Kano (former CBN Governor) recently advised President Buhari look for help both inside and outside of the country. Maybe he is suggesting that Buhari’s economic team is incapable of solving Nigeria’s economic crisis.

Besides, companies hire perceived competent CEOs to create confidence amongst investors. And that was why President Obasanjo went for Mrs Okonjo-Iweala, an internationally respected economist to propel the economic affairs of Nigeria. President Jonathan followed Obasanjo to appoint Mrs Okonjo-Iweala as his finance minister to instil confidence.

I doubt if President Buhari will tweak his cabinet, especially replacing his brothers from his village Daura, who presently run Nigeria. Until Buhari sees reason to hire competent hands his digging will continue. And Nigeria’s next stop will be depression – a sustained economic recession.
Labels: business