Happy New Year! What’s so happy about the New Year? 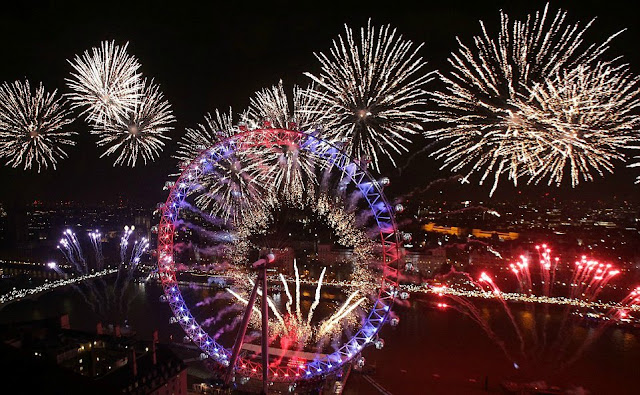 Christmas was a week today (25th December) when it was alleged that Jesus was born. But Christmas wasn’t celebrated until about 336 years after the death of Jesus, during the reign of Constantine, the Roman Empire. That means the earlier Christians didn’t know and never celebrated Christmas.

In Europe, you are forced to celebrate whatever it is that they celebrate on every 25th December; the only period when everyone is truly ‘forced’ to stay at home. A time that businesses are ‘forced’ to close; roads are deserted. And you are ‘forced’ to pay a tripled taxi fare if you ventured to go out.

And a week’s later it’s a New Year celebration, which inevitably seems to be a continuation of Christmas celebration. Everyone is resting at home similar to Christmas, but not as stringent.

Unlike Christmas, New Year has its rituals. Every 31st December prior to 1st January holds the New Year celebration. From people that hold parties to usher in the New Year to the countdown of the clock that will result in billowing smokes from fireworks that welcome the New Year. That’s how it happens in Western World; not forgetting the tradition of New Year’s resolution.

However, in Africa including black Africans in Diaspora; they find themselves in different churches participating in what they call ‘cross over night’. If I may ask, cross over to where? Perhaps, that’s why Jesus said in Matthew 15:9 “but in vain they do worship me, teaching for doctrines the commandments of men.”

And I still recall the ignorance of my village people. They will sweep their family homes, wash-up cooking pots and make sure no food or food remnants followed them to the New Year. Thereafter, as soon as it was 12:01 on every 31st December people will scream; for instance, 2016 go empty handed.

For over 50 years of my life I have been hearing people scream on every 31st December for the old year to go empty handed. Meanwhile in that year there were war and hunger in Africa. A lot of people died because politicians looted the funds meant to be used to build hospitals. And my people continue to tell the old year to go empty handed. Something is wrong here, my people, obviously, are practising European traditions.

Africa had its own New Year. For instance, the New Year for Igbo people of West Africa is about February of the Roman calendar. That is the beginning of farming season, which was when ancient Igbo people prayed to CHUKWU ABIAMA (Almighty God) to intercede to ensure a fruitful harvest.

Now, if you tell the Igbo people of today to follow the practice of their forefathers that worked for them; they will tell you that that was ancient practice. But the New Year that they practice today started 150 years before Jesus was born, which is equally an ancient practice.

Anyway, I am tired of keeping awake every 31st December to tell the old year to go empty handed when I know that isn’t so. Thus, I decided to sleep through this 31/12/2016 until my son woke me up to tell me that the New Year’s countdown has started on the Television.

All the same, I got involved in the countdown with the resultant fireworks. Afterwards, my wife suggested that my New Year’s resolution should be quitting drinking Gin. But if I quit Gin what would I indulge in other to write my posts. Is it Marijuana? You need either of them in other to write well.

Suddenly my son yelled; happy New Year, Daddy! I looked through the window to see if the day changed, but the day was the same. And without appearing too rigid, I responded; Happy New Year too.
Labels: Life