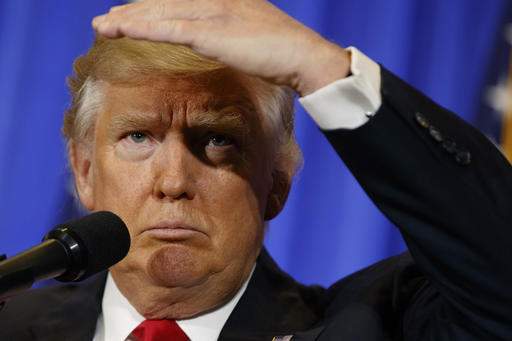 As I was driving down to the dentist with my young son, he suddenly shouted; “OH; Daddy, I have given him a bloody nose; I punched his face very hard…. Hahaha! For a moment I couldn’t workout what he was saying, but he was doing something on his iPad. So I asked him; who did you give a bloody nose? He answered Trump. Which Trump? He replied Donald Trump, the American president. He saw the surprise on my face and he added; it’s only a game - “Punch the Trump”.

I furthered the discussion by asking him why he punched Trump so hard to give him a bloody nose. He told me because he doesn’t like Donald Trump. In fact, “nobody in my class (primary 2) likes him”, he added. I immediately reasoned that some parents have been feeding their children with a lot of negative things about president Trump.

Well, I said to him; that’s interesting, but some of our Igbo people in Nigeria like Trump. He was surprised and quipped, why? They believe that Mr. Trump will eliminate the Fulani herdsmen from the streets of Igbo land. Who are they? They are normally Muslims cattle rearers who, without qualms, kill farmers who dare to stop them from feeding their cows on the crops in their farmlands.

A little bit confused now, my son asked me, but how is Trump going to help them fight the Fulani herdsmen in Nigeria? He is the president of America and not Nigeria. That’s what I am wondering as well, my son.

In addition to eradicating the menace of the Fulani herdsmen, some Igbo people in Nigeria also believe that president Trump will facilitate the establishment of the state of Biafra (for those who want to secede) from Nigeria. Again, how feasible that will be remained to be seen. Moreover, Trump says that his interest is America first and America second, etc.

The Igbo Christians and their Pastors are jubilating that a Christian (Mr. Trump) is occupying the White House now. To them, Obama was a satanic president who wanted to shove immorality (homosexuality) down the throat of Africans. But how a Christian occupying the White house, with truck loads of ‘morality’, will add value to their lives is incomprehensible.

Then again, is Donald Trump a Christian? Simply because Trump complained about the killings of Christians by ISIS, for political reasons, some Igbo people now see him as a crusader, should I say the voice of Christendom. Meanwhile during his acceptance speech, Donald Trump neither mentioned God for once nor attributed his victory to God.

As for some of the members of Peoples Democratic Party (PDP), they are happy with Trump’s presidency because he stopped Hilary Clinton. Hilary’s offence was her and pres Obama’s alleged meddlesome in the Nigeria’s 2015 presidential election. They accused Obama of giving tacit support to President Buhari to win the election. Waiting to see what they will gain from their own tacit support for pres Donald Trump.

Whereas more than half of the world is convulsing with Trump’s presidency, some Igbo people of Nigeria are very comfortably with it. They supported Trump’s executive order banning some Muslim countries from entering the US. In their heads they believe Trump is handling Muslims the way they ought to be handled and thus promoting Christians’ values.

I guess love your neighbour as yourself is one of those Christians’ values. But Trump wants to build a wall at the US border with Mexico; thereby preventing poor Mexicans who are predominately Christians from entering the US to do the jobs that Americans would not do. These poor Christians want to earn a living in order to support their families.

And so, who does Donald Trump wants to come to America? Nobody is really sure, after all Mr. Trump said his mission is to make America great again – America first. And that’s why everyone is concerned with his immigration policy. He is firing at Muslims and Mexicans today, nobody knows whose turn it will be tomorrow.

In fact, the former prime minister of Norway was detained at a US airport even though his diplomatic passport stated clearly that he was the former prime minister of Norway. His offence was that he visited Iran in 2014. Again, former Manchester United football star, Dwight Yorke was denied entry into US because he also visited Iran. And recently, a Nigerian software Engineer was detained at a US airport and made to write a test before he was rescued by the company that invited him.

As you can see, nobody is really exempt from president Trump’s high-handedness. The fact that you are not a victim today doesn’t mean that Trump’s gun barrel will not turn towards you tomorrow. This is why good people including Igbo people who live in America are speaking out.