Biafra/IgboLand: A Nation That Shall Surely Come To Be 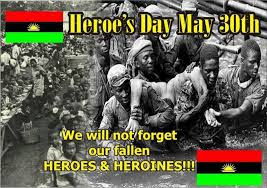 Couple of weeks ago, I was on a Lufthansa flight to New York to attend a seminar on ‘threats posed by Bitcoin against the traditional system of payment’. Bitcoin, by the way, is a digital payment system that occurs directly between individuals, which effectively eliminates financial intermediaries – such as banks and other financial institutions.

Anyway, seated next to me on the plane was a German whom, through our discussion, I found out was also going to New York for the same purpose as me. We chatted on different topics ranging from financial markets to terrorism to politics and etc. In the midst of our discussion he said; Oh I forgot to introduce myself – my name is… and I am from Germany. While he was waiting to know me, rather a big silence stood between us.

Then I regained my consciousness and noticed the bemusement on his face. I said to him, it is not that I have forgotten my name is…, but I was considering how to explain to you that I am from IgboLand. He asked where IgboLand is. It is a colony of Nigeria. He said then you should be a Nigerian. I said no.

For instance, you are from Germany where only German language is spoken, and that makes you a German because you speak German. An Englishman is from Eng-lish-land (England) where English is the language. Likewise, I am from a nation where only Igbo language is spoken, which makes me Igboman from IgboLand – my nationality.

What passport do you have he wondered. I am a dual national of Great Britain and ‘not-so-great’ Nigeria. Though I travel on their passports, but I don’t consider myself part of either of them. But I chose to live in England against living in Nigeria because Britain is presently the lesser of two evils. I can’t possibly live in Nigeria, a country that continues to oppress my people, and contribute to its development. Why do you feel that way he wanted to know? Well, I guess you have heard of Biafra? He affirmed. Now, hear my story in summary.

Nigeria is an area assembled by British colonialists, which comprises several nationalities with different practices. Igbo people championed the cause for Nigeria’s independence and for that reason the British established a permanent hatred for Igbo nation. Before leaving in 1960, Britain institutionalised corruption that is ravaging Nigeria today.

Britain organised the first fraudulent census, which recorded that a desert-northern Nigeria has more population than the rest of the country. Britain effectively bestowed permanently the leadership of Nigeria in the hands of the Islamic Hausa/Fulani people. And till date, the Hausa/Fulani people see Nigeria as their estate.

But why Britain didn’t skew the leadership of Nigeria towards my people (Igbo people) who accepted their religion (Christianity) remains baffling to me. Rather they chose the Islamic Fulani people over their fellow Christians. Considering this scenario suggests to me that Christianity wasn’t about brotherhood in worshipping God but their effective means of control to entrench colonialism.

The hatred that the British had for Igbo people as a result of the perceived threats they saw in a great people (Igbo nation) was transferred to the Islamic Fulani. Without provocation, my people are butchered by the Hausa-Fulani frequently. My people have suffered from Islamic terrorism before Europe and America knew it existed.

However, due to the hostile environment my people saw themselves in the country called Nigeria; in 1967 they declared independence so as to liberate themselves from oppression and incessant killings. The result was genocide against my people with the aid of British and Russian military strength. Now you can see why I will neither call myself a British or a Nigerian. 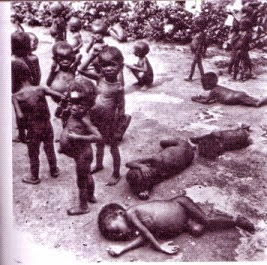 But freedom for my people is not farfetched because all the indices that point toward the collapse of amalgamated unions are happening in Nigeria. For instance, every thing that led to the collapse of Soviet Union is presently going in Nigeria. There are conflicts amongst the nations that make up Nigeria just as it was in the Soviet Union. There are Boko haram, Fulani herdsmen that massacre middle belt farmers and others, Biafra agitators, Niger delta agitators, etc.

And most especially, Nigeria has collapsed structurally and economically just like it happened to Soviet Union. But in the case of the Soviet, President Gorbachev tried to rescue the country by introducing his dual programme; “perestroika” (“restructuring”) and “glasnost” (“openness”). Though his programmes didn’t save the country and according to him, the reason was that the programmes came too late and the people were too impatient to allow the programme to mature.

Whereas in Nigeria the vultures that control the country have refused to restructure Nigeria. They have also refused to subscribe to any form of economic openness – it is business as usual. So if the Soviet can collapse due to these factors in the presence of Russia's military might – the collapse of Nigeria is a matter of time and the independence of Biafra will occur without a bullet being fired.

Today being 30th May 2017, the people of Biafra are commemorating the 50 years of the declaration of Republic of Biafra. All the Biafrans are asked to sit at home wherever they are and they have effectively obeyed the order. 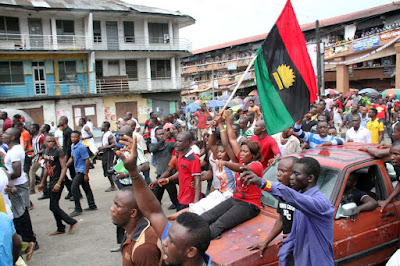 And thus, I advice my fellow Biafrans, while we wait for the total economic collapse of Nigeria that will pave way for the natural birth of our new nation, please endeavour to return your investments to our fatherland. As Nigeria stands still today because Igbo people shut their businesses so it will remain if every Igbo person should relocate his business to our fatherland – IgboLand.

Finally, let me go a bit superstitious, if USSR that prevented the independence of Biafra has disintegrated and Britain is heading towards disintegration with the independence agitation of Scotland; who says that that Nigeria they supported 50 years ago will not disintegrate? I strongly believe that we shall have a new country in no time; I don’t know if it will be called Biafra, but at least we shall be free at last.