Christianity Is The Tool Of White Supremacy 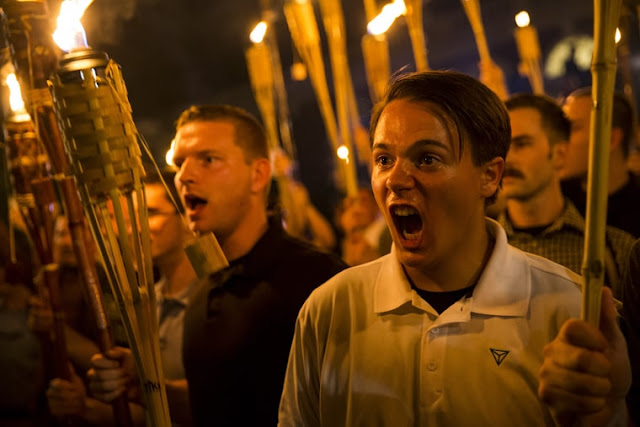 White supremacy is the belief that white race is superior to any other race. Racism is, in addition to one race feeling superior over another, "intolerance of another race."

But, why does a white supremacist believe that the white race is superior to any other race?

He believes that God created the white race to rule the world. That’s the reason a white supremacist says he’s a Christian. How could anyone controvert him? With the exception of Satan (the bad guy) who is painted black, the depiction of everybody in the Christian bible is white.

It doesn’t make sense to me that God created diversified people and when it came to the method of worshipping Him, He sent “His only begotten son” – a white man called Jesus. That "whoever believes him shall not perish, but have eternal life" - white supremacy.

And this white man (Jesus) says “if you see me you have seen my father”, which means if the son is white; the father will equally be white – white supremacy.

So any time you look up to that Caucasian male on the cross in your churches and profess; Oh Jesus; you are my lord and personal saviour, you have inadvertently accepted the supremacy of the white man.

However, Jesus was a Jew according to the Bible. He couldn’t have been a white man, otherwise Jesus and his mother would have been the only white people in the entire Middle East at that time. The Jews themselves feel superior over every other person till today.

Thus when the Romans came to Jerusalem, they met some arrogant people who were waiting for their messiah. And they called themselves the children of God and others – the gentiles. The Romans were enraged.

They created Christianity to replace Judaism and showed the Jews the messiah they were waiting for – Caesar’s messiah. The Jews rejected Christianity and their messiah. In the end they were conquered and exiled. That was the birth of anti-Semitism.

And the superiority contest between the Jews and white supremacists ensued. The Europeans couldn’t tolerate the Jews. Anywhere the Jews found themselves they became like the seeds that fell on good ground, according to the parable of the Sower.

Unfortunately, those seeds that fell on German soil were exterminated by Hitler. And till today; the white supremacists are still paranoid that the Jews want to take over the world. And that is why the attacks on Jewish people persist.

Overall, Asians, from India, Singapore, Korea to Japan and China, etc rejected Christianity – the tool of white supremacist. And that is why they are prosperous till today.

And so, Africans will remain slaves until they go back to their roots. If truly praying to God through Jesus is the right way, Africa would have been a better place than it is today. Unfortunately, the more they pray “through Jesus Christ our Lord” the more things worsen in Africa with diseases, hunger, war, etc.

And the Europeans will come with their aids to help the people who occupy the land that flows with milk and honey. That is exactly how the white supremacist wants you to remain, so that he will always come to your rescue as your lord and personal saviour.

Moreover, he has told you to “seek first the kingdom of God and its righteousness; and everything shall be added to you.” In other words, Africans should rely on Jesus for their progress, but themselves; they do not rely on Jesus for anything. They are capitalists – they work hard for their money.

Looking at the behaviour of some Africans and their leaders, nobody would be in doubt that the white supremacist is right, after all. For instance, the economic downturn of South Africa started with the emergence of a black man as the head of state (President Jacob Zuma).

President Buhari of Nigeria was in London for more than 100 days treating an ailment that was not disclosed to anybody. In fact, police tear-gassed those who demonstrated to know the whereabouts of their president.

When he eventually returned, red carpets were rolled out for him including a military guard of honour; there were people singing and dancing that God has healed their president. Shame! Shame! Shame!

No white man will do that – he will resign once it is clear to him that he cannot do the job he was elected to do.

Definitely I will be abused, mostly by Africans, for ‘insulting’ their Lord Jesus Christ. Well; I am used to your insults. But let me remind you what Harriet Tubman (a black woman) said: "I freed a thousand slaves. I could have freed a thousand more if only they knew they were slaves."
Labels: Politics Religion