Chinese In Africa: Colonialism Is About Repeating Itself 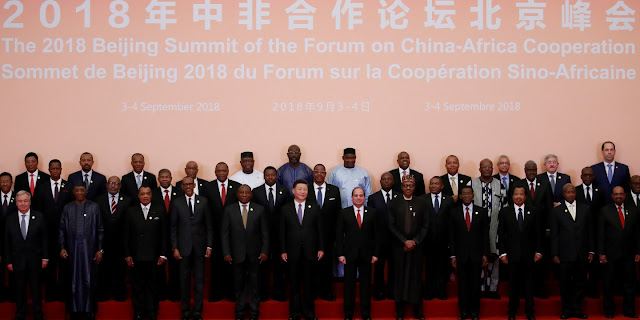 The 2-day China-Africa summit ended on 4/September/2018. About 50 Africa’s heads of state attended the summit held in Beijing. Mr Xi – Chinese president promised a total of $60 billion to finance projects in Africa “in the form of assistance, investment and loans over the next three years.”

China continues to present itself as a better partner to Africa than EU and US. Well, China can never be better than EU, at least EU observes human rights, which China doesn’t care about.

Though China ‘invest’ in Africa in addition to their loans, but these grants come at a cost. One of the conditions of the supposed loan to Africa is that Chinese firms will supply all the equipment, and the manuals are written in Chinese.

And so, Africans need a Chinese to interpret the manuals, and whatever he interprets, is what it is.

Meanwhile the projects will be executed by Chinese engineers. Chinese firms only employ labourers from their host countries. By so doing, the funds from China will never leave the shores of their country. China will never release the funds to Africa.

And these Africa’s heads of state don’t see anything wrong with that. That’s their own definition of bilateral agreement with China. Yet, everyone knows that China has its motives.

Thus, it is pertinent to know the main reason China is in Africa. Western press believe China is interested in Africa’s natural resources for its vast industrial demands. And that “African countries are falling into a debt trap that they will be unable to climb out of.”

It is unimaginable that these African leaders are racking up debt from China in anticipation that the debt will be forgiven at some point. China is not like Europe that can write off debts.

Obviously, if African countries cannot repay the loans, they will repay with their resources. And that’s exactly what China has in mind.

Furthermore, responsible Africans are concerned that these new breeds of African presidents are leading the continent into new colonialism – this time by China. President Ramaphosa thinks otherwise.

He said; “Some [Europe and US] are jealous, and that’s why they say it’s a new colonialism.” “We are dealing with partners that are not arrogant or pushy but want to engage with us.”

President Ramaphosa; China-Africa relationship is another colonialism waiting to occur. That is exactly what it is. Europeans know a colonialist when they see one. Themselves were once colonialists, so they know the modus operandi of a colonialist.

Initially, Europeans came to Africa to trade with Africans as partners. They were not arrogant or pushy but wanted to engage with us. This same type of engagement that the Chinese are coming with, and Mr Ramaphosa cannot hear the alarm bell ringing.

The Europeans equally called it bilateral trade just like what the Chinese call theirs today. In the end, not only that Europeans looted Africa, they colonised Africa and took some Africans as slaves to work in their plantations in the Americas.

That's exactly what this China-Africa relationship is leading to. Africans can nip it in the bud by trading amongst themselves. Every African country should sign the African Continental Free Trade Agreement (ACFTA) “which is expected to increase intra-African trade by 52.3% from the current 19%.”

But president Buhari is always the first leader in Africa to land in China to sign one trade agreement or another. If China is the real deal to Mr Buhari, he must not run to London, UK, for medical treatment, he should go to China. He should also have sent his children to study in China instead of England.

"The white man is very clever. He came quietly and peaceably with his religion. We were amused at his foolishness and allowed him to stay. Now he has won our brothers, and our clan can no longer act like one. He has put a knife on the things that held us together and we have fallen apart."

Likewise - the Chinese man is very clever. He is coming quietly and peaceably with his generosity. We are happy at his goodness and we are allowing him to stay. He will soon win our brothers, and Africa will no longer act like one. He will put a knife on the things that hold us together, if any, and we will fall apart."