Money: From Medium of Exchange To Medium of Influence - The Nigerian Example 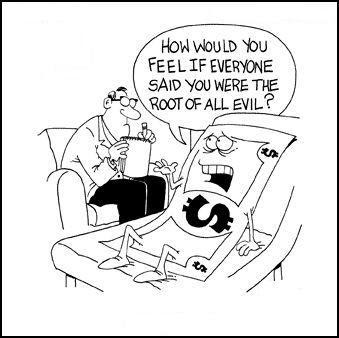 Money (banknotes & coins) is a medium of exchange. But some African politicians and particularly the politicians in Nigeria are gradually redefining money as a medium of influence.
These politicians steal millions of dollars of public funds, not because they want to buy bread and butter, but to control those people who are willing to sell their days for gold – apologies to Kahlil Gibran.

This kind of treasury looting can only happen in a country where kleptocracy is practised but masked as democracy.
Dictionary describes Kleptocracy as “government by those who seek chiefly status and personal gain at the expense of the governed.” This defines in a nutshell the Nigerian system of government.

And to maintain their ‘Chiefly status’ politicians continue to steal public funds to the point that some rational citizens accuse them of stealing moneys that they don’t need.
This assertion is untrue. Nobody steals money that he doesn’t need except he’s a kleptomaniac, which is a mental illness.

But in this instance, these politicians know exactly what they are doing. From the President who controls Nigeria’s resources to a state governor whose only duty is to collect moneys from the president to pay salaries to its civil servants.
In the end, the workers will not be paid because the governor has used the money to maintain his chiefly status.

Sometimes they steal these funds legitimately. The executive arm steal through what they call ‘security votes’ – whatever that means.
The legislatures enact laws to bump-up their salaries. Nigeria is the only country in the world where law (breakers) makers receive more than 2 million US dollars as salaries per annum.

The President becomes Lord of the manor; the entire Nigeria is his estate. Everybody goes to the presidential villa to worship him. Whatever he says is final.
The governors become emperors in their respective states. The legislator becomes the honourable – whatever that means. And they all want the citizens to become their beggars.

The more the citizens rely on politicians, the more freedom the politicians have. They will make people depend on them for their happiness and prosperity.
And to achieve that, the funds earmarked for hospitals, schools and other infrastructures will be stolen by the politicians.

Thus, the weak without a choice will, now, go to the politician for his daily needs; that’s what the politician wants. He’s ready to pay his hospital bills, his children’s school fees, so long as he continues to do his bidding.

Then, the citizen will start to sing praises of the politician. Honourable will be ringing here and there. But the citizen has forgotten that the money is his, in the first place.
Moreover, the politician will neither teach the weakling enough nor give him enough money so that he can do without him.

Depending on the level of their loyalty, some will be appointed as ministers, commissioners, or whatever. But we know that "an empty stomach is not a good political adviser". - Albert Einstein.
And so, the appointee is only there to do the bidding of his godfather and to see if he can steal his own. And the circle continues, and the citizens continue to suffer.

As stated by Machiavelli, “the wise prince will think of ways to keep his citizens of every sort and under every circumstance dependent on the state and on him; and then they will always be trustworthy”.

That was Niccolo Machiavelli in the 15th Century. But in this 21st century, Nigerian politicians still want to follow Machiavelli's rule. And the best way they are going about it is by turning money from a medium of exchange to a medium of influence.
Labels: business Politics