eBible Fellowship: the world will end on 7/October/2015 – but the world didn’t end.

eBible Fellowship and its founder, Chris McCain told the inhabitants of the world to get ready as the earth will burn to an end on 7/October/2015. And here we are thereafter; the earth is still revolving around the sun. 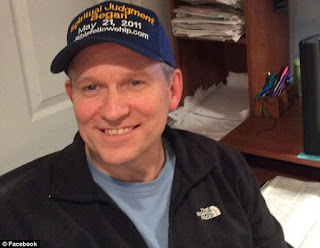 So, why didn’t the earth burn as McCain predicted? The only answer he offered was that ‘it is surprising that the world didn’t end.’ He quickly added that the world will definitely end soon. But he didn’t say when.

Christians like McCain make those people who have doubts about Christianity and its bible to justify their positions.
Again, in the past many Christians have predicted that the end of the world, which always turned out to be false.

By the way, which earth are these Christians predicting that will burn down? Is it the same earth, which Jesus said that the meek shall inherit in Matthew 5:5?

Even in the book of Revelation where John said 144,000 persons from the 12 tribes of Israel went to heaven, he further said that other people from different tribes and nations etc. were equally saved. But he didn’t say where they went/will go to.

These other people that were saved could probably be those meek that Jesus said will inherit the earth. In that case, the earth isn’t going to burn because some people will inherit it.

Nevertheless, if the earth will burn as Christians claim, then, which other earth would the meek inherit? Or don’t these Christians believe the words of Jesus anymore?

Unfortunately, this idea that the world will end originated from the first book of the bible - Genesis.

The bible said in Genesis 6: 5-6; “the Lord saw how great the wickedness of the human race had become on the earth, and that every inclination of the thoughts of the human heart was only evil all the time.

Surprisingly, in Genesis 5, the Christian God started seeing the wickedness of the man He created just in Genesis Chapter 1.

And in verse 6; “the Lord regretted that he had made human beings on the earth, and his heart was deeply troubled”. Thereafter, God decided to destroy what he created.

Can God regret? The omnipotent, omniscient and omniscience God – regret? Damn!!! This is the most sacrilegious statement that I have read all my life.

Whoever that believes that God ever regretted his actions has accepted that God is imperfect. May the original African God (Chineke), forbid this blasphemy. Our God (Chineke) is perfect and so cannot regret His actions because regret is associated with imperfection.

However, in Genesis 9:11, the same Christian God promised Noah; “I establish my covenant with you: Never again will all life be destroyed by the waters of a flood; never again will there be a flood to destroy the earth.”

The tone of that covenant with Noah suggests that the Christian God, after all, was remorseful for destroying the world. So why would he now destroy the world with fire? The thought that God will destroy the earth with fire is just the imagination of the overzealous Christian Science Practitioners.

Hence, I call on all Africans in particular and the inhabitants of the world in general to return to the true one African God, who we call CHINEKE in Igbo language and who we worship through our African practices (Ome N’ala Igbo).

In Ome N’ala, our Chineke is supreme and perfect; he does not regret His actions. And He is not going to destroy the world with fire. If an earthly man cannot even maliciously smack his children, then, why would our loving CHI-UKWU (greatest God) destroy His children with fire?

Moreover, man is spirit and spirits don’t die. Even the bible acknowledged that God created man in his own image. And the image of God is spirit.

But there’s a reward for sin in Ome N’ala. And that reward comes at old age and continues after reincarnation until atonement of sin is made. In other words, a man who committed abomination/sin will be stricken with ailment until he confesses his sins before he dies.

This confession is called EBIBI in Igbo language and it is where the Catholics got the practice of giving last rites to their dying. In Ome N’ala, the dying old man will numerate his sins and ask Chineke for forgiveness and promise to be a better person when he reincarnates.

Thus, when a child is born in that family, there’ll be signs that the man has reincarnated. In most cases, the man will say either by his actions or words that he has reincarnated.
His punishments will start either with illness or other mishaps. The family will make atonement for the sins of his previous life to end his punishments in the present life.

On the other hand, the EBIBI of a righteous man will usually be to ask Chineke to help him, in his next life, to accomplish those dreams that he couldn’t achieve in the present life.

Finally, as someone joked, when you die, you look for another vagina to pass through to re-enter the earth. And that’s the beginning and ending of the world.
Labels: Life Religion