Someone asked me to explain capitalism to him. Well, capitalism is simply Matthew 25:29. And what does it say? “For to everyone who has will more be given, and he will have an abundance. But from the one who has not, even what he has will be taken away.” 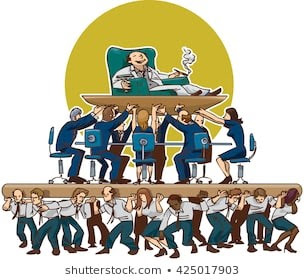 How does that explain capitalism?
USA is the custodian of capitalism. Republicans are the promoters of capitalism in America. They are also the defenders of Christianity.

They were also the slave owners of which the bible was used to legitimise their atrocities.

Any slave that tried to revolt was reminded what the ‘word of god’ said in Ephesians 6:5, “Slaves, obey your earthly masters with respect and fear, and with sincerity of heart, just as you would obey Christ.”

And if they slap the slave on one cheek, they will remind him what our lord Jesus said in Matthew 5:39; “...If anyone slaps you on the right cheek, turn to them the other cheek also.”

Democrats, on the other hand, uphold capitalism with a touch of human face. And so, president Obama created “affordable healthcare act”, which gave healthcare access to the poor Americans.

The big insurance companies kicked against it because it affected their profits, but they lost. The poor gained.

Thence came republicans and president Trump who are fighting very hard to take away the only favour ever granted to the poor in the history of America.

Trump and his party are taking the matter to the courts, if they win, “…from the one who has not, even what he has will be taken away and given to those who have an abundance – Insurance Companies.

That’s capitalism; the rich gets richer – the poor gets poorer.
Labels: Politics Religion