'Shakara' Of The Islamic Republic Of Iran

In his music Shakara, Fela Kuti described a Shakara man as someone who will threaten you with fire and brimstone to the point that you may even believe that you are dead already. 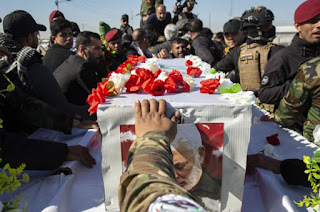 But in the end, the Shakara man will do nothing because he has no strength to fight. Fela said; there is Shakara man, and there’s Shakara woman. And perhaps, there are Shakara countries.

On 2/Jan/2020, America killed General Soleimani of Iran. Ayatollah promised America and the world that Iran will retaliate.
They threatened fire and brimstone, and that terrorist America will pay heavily for their action.

The world paused since 02/01/2020 waiting for Iran’s retaliation. Even some people suggested that third world war is in the making.

Donald Trump on his part threatened that if Iran retaliates; America has identified 52 Iranian sites that would be bombed with their 2 trillion-dollar war machines.

The price of Crude oil rose, while the US dollars lost value. World war 3 was becoming a reality.

Today, 08/01/2020 – Iran bombed 2 US bases in Iraq. 12 ballistic missiles in total were fired. They even showed the video of the flying rockets.

The world stood still, the price of crude oil rose further, and the Dollar went downwards. Everybody waited for the dust to settle to start counting the casualties. The media started speculating on the number of dead US soldiers.

While we were waiting, The Donald tweeted “so far, so good”. What do you mean by that Mr Trump? Are you insinuating that no US soldier died? 12 missiles fired and no casualty? You must be kidding.

When the dust finally settled, a Boeing plane belonging to Ukraine International Airlines had crashed in Iran killing all 176 people on board. “Ukraine has refused to rule out that the plane was struck by a missile.”

Besides, it’s strange that Iran launched 12 missiles into US bases and there were no dead US soldiers, only “minimal damage” according to Mr Trump.

Why then did Iran launch these missiles if not to kill as many US soldiers as possible to avenge the killing of General Soleimani?

Perhaps, Iranian locally made missiles weren’t good enough for the job. Or they deliberately did not want to kill US soldiers as the consequences may be dire.

After all their threats of retaliation for the killing of General Soleimani, all Iran could do was to fire 12 missiles into open fields.

These are the kind of people Fela Kuti used to call "Shakara Oloje" - Full of threats but no strength to fight - like Shakara Islamic Republic of Iran.
Labels: Politics