Malam Abba Kyari, the Chief of staff to president Buhari, is dead and buried. He was a victim of covid-19. To many Nigerians Malam Abba was a bad man, and to many of his friends, mostly journalists, he was a good man. Whether he was bad or good only God judges. 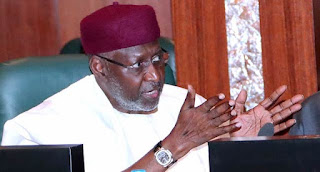 Ann Ross said, “I don’t believe in speaking ill of the dead, even when it’s the truth.”
Likewise, we should not be speaking good of the dead, especially when we know what we are saying is a lie.
The friends of Malam Abba have been eulogising him. They said he was loyal to his friends and to his boss (Buhari) whom he was ready to take bullets for.
Also, that he was a patriotic Nigerian who served his country to the best of his ability.

I am not here to judge Malam Abba, but to tell his friends to stop referring to Nigerians as fools.
Mallam Abba may be loyal to his friends, but, was he loyal to Nigeria? To answer this question let’s consider if President Buhari whom he was ready to take bullets for, is a patriotic Nigerian.

Since Buhari became the president of Nigeria, nepotism, tribalism, sectionalism, religious bigotry, etc. have been the face of his administration. 90 percent of the head of Nigeria’s security apparatus are headed by northern Muslims. Every important federal ministry/department is headed by a northern Muslim.

Fulani herdsmen have been killing and maiming innocent people all over Nigeria. They walk about openly with their AK-47 assault rifles, yet none of them has been arrested.
But Buhari was very quick to send soldiers to massacre armless IPOB members. If Buhari is a patriotic leader, he ought to be fair to all.

According to President Theodore Roosevelt, “Patriotism means to stand by the country. It does not mean to stand by the president or any other public official.”
Malam Abba witnessed Buhari’s injustices but apparently said or did nothing. That means his patriotism was to Buhari and not to the country.

If Malam Abba wasn’t in support of Buhari’s unfairness, perhaps he spoke against them but Buhari stood his grounds, the reasonable thing he ought to have done was to resign.
Officials in a sane country would resign when a policy goes against their conscience. Malam Abba stayed on, supposedly, to take Buhari’s unpatriotic bullets, which equally made him an unpatriotic Nigerian.

Moreover, if Malam Abba was as patriotic as they now want us to believe, why did he lie under oath that Buhari has a Cambridge school certificate? He even presented a certificate that, according to him, he personally obtained from Cambridge, UK.

Sadly, many Nigerians have spoken ill of late Malam Abba. The Kano state’s commissioner of works (Mr Magaji) wrote, “it’s very, very important we put things in perspective so that we can save our system from punitive unconstitutional usurpers in the future.” He has since been fired.

However, Abba Kyari’s friends have tried to disprove that he was an unconstitutional usurper. They have also tried to exonerate him from the failings of Buhari’s administration.
They told us that Buhari was the person Nigerians elected, and so, the bucks stop at his table. Any blame should go to Buhari and not to Malam Abba who was his appointee. That’s true.

But we know that Buhari does not have the capacity to oversee any task given to him. In the past, Buhari delegated his responsibilities to other people.
Before his death, Malam Abba clearly handled Buhari’s presidential responsibilities. Malam Abba was Nigeria’s de-facto president despite whatever anybody has to say.

For instance, President Buhari directed all his Ministers to report directly to Malam Abba. Aisha Buhari (wife of the president) literally informed Nigerians that her husband was not in charge of Nigeria but Malam Abba. National security adviser wrote a memo that Malam Abba was sabotaging the fight against boko haram, etc.

In addition, when South East Governors were soliciting for Federal funds to rehabilitate Enugu international airport, according to Mr Fani-Kayode, they went to Malam Abba who secured the funding (N10 billion). They didn’t go to the president, his vice or the Aviation Minister.

Clearly before his death, Malam Abba was immensely powerful and influential in Buhari’s administration whether or not he was a usurper, and nobody should tell us otherwise.

By the way, Malam Abba was accused of taking bribe from MTN to lower their fines. He was also accused of nepotism and electoral manipulation, including the humiliation and sacking of the former Chief Justice Onnoghen. Malam Abba did not defend himself while he was alive. Why?

His friends, especially Simon Kolawole of ThisDay newspapers, said they tried several times to persuade Malam Abba to present his own side of the story.
They even volunteered to write a rebuttal on his behalf. But Abba refused, he insisted that he was alright as long as his principal (Buhari) trusted him, and his conscience was clear. Kolawole added, Malam Abba went to his grave with his own side of the story.

Finally, if Malam Abba didn’t defend himself and didn't want his friends to defend him while he was alive, in death they should do him a favour by remaining silent as he wished.