Biafra Is More Than A Place, Biafra Is An Idea. 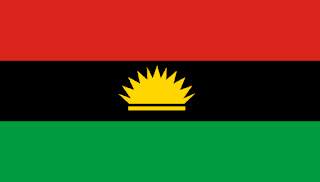 Part of the preparation for the bar or bat mitzvah is, the children will learn the story of exodus and sing the song of freedom.
The same sung their ancestors sang when Moses supposedly led them out of Egypt, and into Canaan. This makes the story of exodus endless.
The central message of exodus is Passover, when “Moses instructed the Jews to sacrifice a lamb and to paint its blood on their doors so that the angel of death would know who was Jewish and who wasn't.”
Passover remains a big celebration amongst Jewish people. According to Jonathan Safran Foer, the author of "New American Haggadah”, "what we say at the end of Seder (ceremonial Jewish dinner on the first night of Passover) is 'next year in Jerusalem,' but it's kind of funny to say that now because we could go to Israel."
In other words, Jewish people no longer dream of going to Jerusalem because going to Jerusalem is now a reality.
Furthermore, Foer said that "Jerusalem is more than a place. Jerusalem is an idea. Jerusalem is an ideal place where there are no slaves, where…everybody has freedom.” abcnews
And so, going by what Jewish people see Jerusalem as, IPOB and other Biafra agitators should see Biafra as an idea, rather than a place. I am using the Jews as an example because Mazi Nnamdi Kanu, the leader of IPOB, has always endeared himself to Judaism, and has accepted Israel as a model of freedom.
But there is a pattern of Kanu’s agitation for Biafra that goes contrary to the Jewish believe that Jerusalem is more than a place. Kanu sees Biafra as a place rather than an idea. The IPOB leader has drawn his map of Biafra that includes Igala, Idoma and the rest of Niger Delta region.
He included Igala and Idoma in his Biafra map because of the myth that they originated from Nri kingdom. And so, they are historically Igbo people.
If being Igbo is the reason Idoma and Igala must be part of Biafra, then, what criteria did Kanu use to include Efik, Ibibio, Ijaw, Urhobo, Ishekiri, etc, into Biafra? These people are not historically Igbo.
In fact, the circumstance that made Efik, Ibibio, Ijaw, etc part of Dim Emeka Ojukwu’s Biafra is no longer there. They were part of Eastern region. They are now part of Niger Delta (South-South) geopolitical zone.
Moreover, the bight of Biafra where republic of Biafra got its name from is in Bayelsa state (Ijaw). Majority of Ijaw people never believed in Biafra then, and they still don’t believe in Biafra today, with the exception of Alhaji Asari Dokubo.
Generally speaking, Biafra is an Igbo project, at least, that’s what the rest of the people of Nigeria believe, including those people Nnamdi Kanu contained in his map of Biafra. The generality of Igbo also believe that Biafra is for Ndigbo.
Now, a man approached me at a supermarket. (When Nigerians see each other in a foreign country they are drawn to exchange pleasantries.) Thereafter, I asked him the part of Nigeria he came from. A little silence ensued, then he looked deep into my eyes and said, Biafra-land.
I started laughing, he asked why I was laughing. Then he immediately asked me in Igbo language the part of Biafra-land that I am from.
I told him that I am not from Biafra-land. I am from Igboland. He said, they are the same. Now you know why I said Igbo see Biafra as Igbo thing.
If Biafra is an Igbo thing, why then rename Igboland to Biafra-land? We are trying to run away from Nigeria, a name given by the British, and to Biafra, a name given by the Portuguese. It does not add up.
We are Igbo, our language is Igbo, our name is Igbo, if really we need independence, we will only be truly independent if we answer who we are. We are not Biafrans. What is achievable is independent Igbo nation, and not Biafra independence.
Then, if we run our independent Igbo nation successfully, our historical and other neighbours would apply to be part of us. For instance, Scotland joined England and Wales to form the United Kingdom in 1707. Other nations may decide to join Igbo in the future and perhaps form the Republic of Biafra.
Biafra represents freedom, and not a place. Just like Jerusalem, Biafra is an ideal place where Ndigbo will be free from political, economic, and religious interference from their neighbours. This freedom will only come when we start seeing Biafra as an idea than a place.
Overall, there will never be a Biafra as a place where Igala, Idoma, Efik, Ijaw, etc will be in one country with Ndigbo. But if we treat Biafra as an idea, Ndigbo will eventually have their freedom, and a country called IGBO REPUBLIC would emerge.
Ka Chineke mezie okwu! Iseee!
~liberate your mind
Labels: Politics