Mali – Whether Civilian Or Military, A Coup Is A Coup

“Those who make peaceful [change] impossible will make violent [change] inevitable”, according to John F Kennedy.
This is the current situation in Mali. The country’s military have decided to change the government in Mali since the politicians refused to respect the change of government Malians voted for. 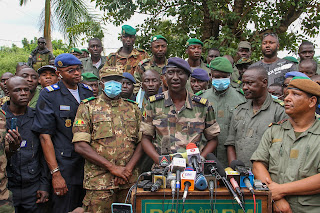 The whole world has condemned the military coup in Mali. From ECOWAS to the African Union, from the European Union to the American Union (US), and from every other union in the world to the United Nations.
All of them want the return of democracy in Mali.
According to these proponents of democracy, there’s no alternative to democracy.
Some have even said that the worst civilian government is better than the best military government. But what is the meaning of this democracy they are so much in love with?
The words of Abraham Lincoln in his famous Gettysburg Address while honouring soldiers that sacrificed their lives in order “that government of the people, by the people, for the people, shall not perish from the earth”, splendidly defined democracy.
This definition of democracy is the doctrine of governance in Europe and America. The politicians in Europe and America are conscious that power resides with the people. They know that they are servant leaders who are accountable to the people.
They know that they can be voted out of government for non-performance. And so, they work in the interest of the people to remain in power. And once they lose elections, they acknowledge the results and leave office. None of them tries to rewrite election results or employ thugs to snatch ballot boxes on their behalf.
In fact, in a thriving democracy, unfavourable opinion polls indicating people’s dissatisfaction with the government can bring down a government.
For example, “the Lebanese government resigned amid growing public anger following a devastating explosion in Beirut on 4 August that killed at least 200 people and injured around 5,000 others.” ~ BBC
The Lebanese government acknowledged negligence and resigned. That was democracy in action – people’s power in control. The exertion of “government of the people, by the people, for the people”.
But in Africa, democracy has a different meaning. It is government of the gangsters, by the gangsters, for the gangsters. Election in Africa is determined by how deep your pocket is, and by how many people you can kill.
Africa's politicians rewrite election results if they lose and refuse to leave office. They maim and kill people to remain in office. That’s why we have gangsters and mediocre heads of state in most African countries.
Brilliant minds stay away from politics in Africa because they will never engage in thuggery. Yes, “one of the penalties of refusing to participate in politics is that you end up being governed by your inferiors” ~ Plato. I guess if Plato were in Africa today, the carnage being perpetrated by Africa's politicians would make him change his opinion.
In all these, the defenders of democracy in Europe and America pretend not to notice that government by the people, for the people is not what we practice in Africa.
Therefore, if they genuinely want democracy in Africa, they should ensure that Africa's democracy is practiced the same way democracy is practiced in Europe.
As such, we expect the Europeans to tell the politicians in Africa that rigging an election is not part of democracy. Writing election results to favour themselves is not part of democracy. They should tell them to resign when the people are dissatisfied with their administration.
Yet, when Malians were demonstrating against bad governance and rigged elections they didn’t tell the Malian government that what they were doing wasn’t democracy. But when the Malian military struck, they have the effrontery to condemn them.
There’s a certain Mr Paul Biya who has been the president of Cameroon for all I can remember. He keeps winning elections against the wishes of Cameroonians. I guess that’s the kind of democracy France in particular prefers. They haven’t told Mr Biya that elections are not won like that in France.
Like Paul Biya there’s Mr Teodoro Obiang Nguema Mbasogo who has been the 2nd President of Equatorial Guinea since August 1979. He keeps winning his elections by hook or crook. And our European monitors haven’t yet told him that that is not democracy.
There’s another fellow, President Buhari of Nigeria, who I am sure is senile. All sorts of atrocities are being committed in his name.
A few days ago, some unarmed IPOB (Biafra) members were killed in Enugu by the Nigerian security forces. Their offence – they were holding a meeting. The last time I checked, freedom of association is an aspect of democracy.
Protesters are killed or jailed daily by the Nigerian government. The defenders of democracy are yet to tell Nigerian authorities that demonstration is an act of democracy. If they are silent today while democracy is assaulted in Nigeria, let them remain silent even if there is a coup in Nigeria today.
The Europeans should tell Africa politicians that when they rig elections against the wishes of the people, it is no longer government by the people, for the people.
It is a coup d'état – a civilian coup. Likewise, if the military use their guns to dethrone politicians because they (politicians) refused to allow people’s wishes to stand – that’s equally a coup – a military coup.
Whether the politicians are disenfranchising the people, or the military are overthrowing the politicians, both mean the same thing – coup d'état, and none of them is right.
Consequently, until there is an end to civilian coups in Africa, there will always be military coups in Africa. The only panacea to military coups in Africa is good governance.
And the only way to achieve good governance is when Africa’s politicians fully accepted that the true meaning of Democracy is “government of the people, by the people, for the people”. Other than that – we will continue to have military coups in Africa.
Labels: Politics