In 1988, Mr Salman Rushdie published a novel he called “The Satanic Verses”. The book was partly based on the life of Prophet Mohammad.
Mr Rushdie highlighted some verses of the Quran and information from other sources, which questioned what prophet Muhammad claimed to be. 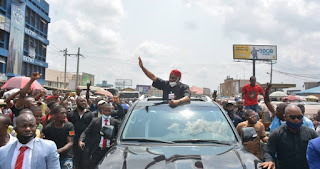 For instance, according to Mr Rushdie, prophet Muhammad declared that polytheism (worship of multiple gods) was revealed to him.
He later renounced it as an error caused by the Devil and changed to monotheism (worship of one god).
In addition, Mr Rushdie stated that a companion of prophet Mohammad claimed that while the prophet was dictating the Quran to him, he cleverly modified some portions of the ‘holy book’ because he doubted the prophet.
Mr Rushdie’s book angered the Muslim world. Ayatollah Khomeini, the then Supreme Leader of Iran, declared Fatwa (death sentence) on him. Mr Rushdie responded by saying, “Without the freedom to offend, freedom of expression ceases to exist.”
And so, following the examples of Mr Rushdie, let me highlight the Satanic verses of Abia state as written by its former governor - Chief Orji Uzo Kalu (OUK). And as modified by his companion – his former Chief of Staff – Chief TA Orji (TA).
Hopefully, no Fatwa will be declared on me even though it is not my intention to offend anyone. But I know that my opinion may offend you depending on your ethics, and that’s what comes with freedom of expression. I am sorry.
All the same, the metamorphosis of Abia state started when Dr M. I. Okpara was the Premier of the Eastern Region of Nigeria. This transformation continued through Dee Sam Mbakwe as the Governor of old Imo state until 1991 when Abia sated was birthed. These were the fruitful period in the lives of Igbo people.
From 1991, all those achievements recorded from Eastern Region through East Central State to old Imo State started eroding. Then came 1999 when a new chapter was opened by OUK as the governor of Abia state.
OUK started scripting the Satanic Verses of Abia state while pretending to be a prophet sent from heaven. Like Mr Rushdie suggested in his book, humans can be made to believe what may be unreal. That was exactly how OUK ruled Abia State.
In fact, OUK did not just write his Satanic verses as a governor, he literally invited Satan to participate in the governance of Abia State. Political appointees were taken to all sorts of deities to swear oath of allegiance to OUK and his family. Not only that, the family looted the treasury of Abia State.
After 12 years of facing charges of corruption, OUK was finally convicted for defrauding Abia State government. On 05/December/2019, OUK was sentenced to 12 years in prison for N7.65 billion fraud using his company – Slok Nig. Ltd.
Somehow OUK got out of prison. The Supreme court of Nigeria set OUK free not because EFCC did not prove their case against OUK beyond reasonable doubt, but because the Judge who heard the case was not supposed to do so. The usual judicial abracadabra of the Nigeria’s Supreme Court.
I am certain OUK will never see prison again. The first prison sentence was a glitch. A lot has changed since OUK was in prison. The head of the cabal at the presidency (Abba Kyari) has since died.
Moreover, Ibrahim Magu of EFCC has been dismissed. The new head of the cabal, Attorney General Malami, is corruption personified. And like Oshiomhole said, once you join APC your sins are forgiven. As an APC member, OUK sins have been forgiven.
Since OUK came out of the prison, both APC and PDP politicians have been visiting to commiserate with him. Of all the visits OUK received, 2 visits stood out – that of TA Orji and his son, Mr Chinedum Orji (Speaker of Abia House of Assembly).
During his visit, Speaker Orji confessed to OUK, “without you, my father (TA) and I wouldn’t have been what we are today.” That’s correct. Mr Speaker, as such, invited OUK to come and take over the leadership of Abia State despite their party differences.
Hang on a second. I thought TA once called himself the liberator of Abia State? TA boasted that he liberated Abia State from the Satanic ways of OUK and his mother. Mr Liberator and his son are now handing over Abia State to the same OUK they claimed they liberated Abia from. Odiegwu!
Anyway, OUK has made a triumphant entry into Abia State, presumably, to take over the state as bequeathed by TA and his son. The worrying thing was that some Abia youths lined up the streets cheering the man who stole N7.65 billion of their money.
Shamelessly, OUK encouraged his ‘supporters’ to troop out in their numbers to welcome him while disregarding social distancing in this difficult period of deadly Covid-19. Of course, he is only interested in his political ambition than the wellbeing of the ‘poor masses’.
In all, one of Bob Marley’s lyrics stated, “how long shall they kill our prophets while we stand aside and look”? But I say, how long shall our ‘prophets’ kill us while we stand aside and look? Obviously, Nigerian people forget easily, and not only that, they love their oppressors.
If not, how can the residents of Abia State stand aside and accept the return of Orji Uzo Kalu together with his new chapter of Satanic Verses?
Labels: Politics