The Meaning of Di In IGBO Tradition, It Does Not Mean Husband On Its Own

I watched a video where Archbishop Anthony Obinna of Owerri dioceses was commenting on the injustices of OSU practice in Igbo land.
The Archbishop stated that Di means husband in Igbo, and that land is Arusi (deity), therefore, Di-Ala means husband of Arusi. This assertion is incorrect. 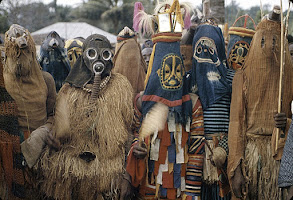 Di does not mean husband on its own. In fact, Di means “Master Of”. It is a title used to recognize achievements in Igbo culture.
Di (Master of) is akin to the award of a post graduate degree from a University. Say, MSc, which is Master of Science, or MA – Master of Arts.
And so, in Igbo tradition Master of Science would be Di-Science.
Now, Mgba for example means wrestling in Igbo language. So, if you are a wrestling Champion, you are given the title of Di-Mgba, which means Master of Wrestling.
The above example is applicable to other types of Di, such as, Di-Ike - Ike means strength, and so, Master of strength. Di-Agha, Agha means war, hence, Master of war (Warrior/Ochiagha), etc.
When a man marries a woman, it is considered an achievement in Igbo culture, he becomes Di-Nwanyi – Master of woman, which now means husband in English.
Master on its own means Nna-Ukwu in Igbo.
Thus, it is common in Igbo villages to use Nna-gi-Ukwu (your master) to ask a wife about her husband. Say, kedu maka Nna-gi-Ukwu (how is your master/husband)?
Even young wives of today ask each other, how is your Oga? Oga means master.
Moreover, when a woman calls a man Di-mu (Dim), she is simply calling the man, my master (husband). In other words, Dim means my master.
Now, you know why Dim Chukwuemeka Ojukwu (Eze Igbo Gburugburu) of blessed memory directed that he should be addressed as Dim Chukwuemeka Ojukwu.
Because when you called him Dim Ojukwu, you were inadvertently calling him My Master (Nna-M-Ukwu) Emeka Ojukwu.
As we have established that Di means ‘Master Of’ and Ala means land in Igbo language, therefore, Di-Ala means Master of Land. It doesn’t mean husband of Arusi.
Although every land had or still have a deity (Arusi) that protects the land, supposedly, that piece of land where the Arusi resided or still resides is known as IHU-ALA (Shrine).
That particular land can be called Arusi since it belongs to the Arusi. But the land inhabited by the people do not belong to Arusi and so,  cannot be known as Arusi.
A good example of Arusi versus Ala (land) is Nnewi people versus Ana-Edo. Edo (Gold) is the deity of Nnewi people of Anambra state.
Before Nnewi people built the International Market on Ana-Edo (Land of Edo) they appeased Edo (their Deity) and perhaps, they relocated the Edo to another land. This shows that every land is not Arusi.
Overall, Land is not Arusi but an area, such as English land (England), Scottish land (Scotland), etc. Likewise, we have Igbo Land, Ibibio land etc.
Therefore, Di-Ala means Master of Land and NOT husband of Arusi.
~ liberate your mind
Labels: Life