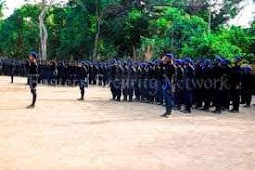 Mazi Nnamdi Kanu (MNK), from his comfort zone in London, makes unilateral decisions that imperil the same people he is supposedly trying to liberate.
The setting up of his eastern security network (ESN) is the utmost propaganda to fool the Nigerian govt. while attracting more financial support from Ndigbo worldwide.
Obviously, the video released by MNK showing several ESN members and other ESN volunteers were overstated. The ESN video is an example of Digital Crowd Multiplication using Adobe Premiere software.
In this era of deep-fake videos and Artificial Intelligence (AI), all it takes to create a video of a thousand crowd, is just a few people. And that was what MNK did with his ESN video.
However, Nigerians, especially the Fulani controlled northern Nigeria, are always very apprehensive of Igbo ingenuities.
Thus, the number of young men showed in the ESN video ought to panic any government into offensive.
And that is why the Nigerian Airforce is bombing computer-generated members of ESN in Orlu forest, believing that they are bombing real people.
Who would blame Buhari and his bandits for swinging into action in Orlu forest? After all, “prevention is better than cure”.
All the same, Buhari presidency is the most ignorant executive in the history of Nigeria. With a little investigation, they would have realised that ESN is just a group of about 10 men that Kanu multiplied into thousands, using technology.
ESN members are just those masked men we saw in another video running around in the bush with their AK-47s.
If Buhari and his men know about digital crowd multiplication technology, they would have saved their bullets for more tedious task at Sambisa forest than chasing shadows at Orlu forest.
Now that the bombings have started, some Ndigbo are questioning why Ohaneze is not speaking against the bombing of Ndigbo. Perhaps, Ohaneze knows that there is no ESN in Orlu forest.
Obviously, the supreme court governor of Imo state who invited the military to bomb Orlu forest is equally naïve.
As the chief security officer of Imo state, does Hope Uzodinma believe that it is possible for MNK to gather those men in the video, anywhere in the south east, without detection?
If the Imo state governor and the Fulani govt of Nigeria believed that MNK was able to gather the men we saw in the ESN video somewhere in the south east without detection, they have acknowledged that Nigeria is unsecured.
Most astonishingly, majority of Ndigbo and other Nigerians believe that the crowd they saw in the ESN video are practically stationed somewhere in Orlu forest. If it was so, by now we should be counting dead bodies.
And let me ask, is MNK using ESN as a strategy for the actualisation of Biafra, or a tool of propaganda for more donations from Ndigbo worldwide?
Well, Grete de Francesco answered it as follows: “The charlatan achieves his great power by simply opening a possibility for men to believe what they already want to believe....
The credulous cannot keep at a distance; they crowd around the wonder worker, entering his personal aura, surrendering themselves to illusion with a heavy solemnity, like cattle.”
The gullible should wake up – ESN is MNK propaganda tool for more donations from Ndigbo worldwide.
~liberate your mind.
Labels: Politics