The rumour mill has gone into overdrive with suggestions that APC are wooing former President Goodluck Jonathan (GEJ) to contest the 2023 presidential election under their banner. Mr Jonathan has neither confirmed nor denied the rumour. 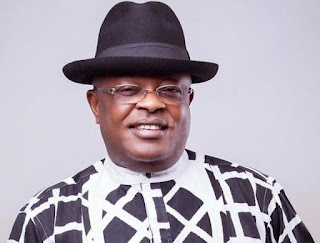 However, I started paying attention to the rumour when Femi Fani-Kayode (FFK) tried to join APC but was rejected by the Fulani establishment for all the insults they received from him.
FFK is an ardent supporter of GEJ. By attempting to join the political party he once called a satanic party, it is highly likely that GEJ has confirmed his intention to join APC to FFK.
Moreover, over the weekend, the former Chief of Army Staff during Mr Jonathan’s administration, General Ihejirika, joined APC. May be, this is just a coincidence.
In fact, it will be a monumental mistake for GEJ to even contemplate vying for an elective position in Nigeria, no matter the party, and definitely not APC. He will be totally humiliated in 2023.
If GEJ is banking on the sympathy of Ndigbo, that won’t be available in 2023. Let him be assured of that.
But this other guy, Gov. David Umahi of Ebonyi state, with apologetic smile, has different political agenda after the end of his tenure as governor of Ebonyi state.
Mr Umahi defected to APC on the excuse that his former party (PDP) have no intention of zoning the presidency to Ndigbo. But he didn’t say if APC have zoned the presidency to Ndigbo.
Then, responding to the rumour that he has been promised the 2023 presidential ticket, Umahi categorically stated that he is not interested in contesting the 2023 presidential election. David Umahi was right.
Gov Umahi doesn’t want to be president in 2023. He wants to be the vice president in 2027. Gov Umahi’s long term project is to be the vice president of Nigeria in 2027.
This hypothesis is not difficult to workout. The likely reason Gov Umahi won’t be contesting the 2023 presidential election is because APC have reserved the presidential ticket for GEJ.
If GEJ accepts to contest the 2023 presidential election under APC and wins, he will be president for 4 years (his second and final term).
Thereafter, the presidency would return to northern Nigeria. A northern presidential candidate would pick David Umahi as his VP in 2027.
As you can see, all these noises from these Igbo political buccaneers are just a ruse. They have already sold their birth rights before they were even born.
By the way, Orji Uzo Kalu and Rochas Okorocha have not hidden their intentions of contesting the 2023 presidential election.
Unfortunately, Orji Uzo is heading to prison, and the Supreme Court Governor of Imo state is busy dismantling Rochas Okorocha.
And so, the only viable governor (past and present) within APC, and with loads of cash to prosecute a presidential election in Nigeria is Gov David Umahi.
Yet David Umahi is not interested in 2023 presidential elections even though he joined APC because, according to him, PDP refused to zone the presidency to Ndigbo.
Anyway, we will be waiting to hear the reason they will give to Ndigbo to vote for GEJ in 2023. Hope they won't forget that they already told us in 2020 that it is the turn of Ndigbo to produce the next president of Nigeria in 2023.
If this Jonathan’s rumour becomes reality, and he becomes the president in 2023, it will take Ndigbo another 12 years (GEJ 4yrs + Fulani 8yrs) before we start talking again that it is our turn to produce the president of Nigeria.
All the same, let me say this, I am in favour of restructuring Nigeria than having Igbo presidency that will mean nothing to ordinary Ndigbo.
~liberate your mind
Labels: Politics