Plutocratic Nigeria Is Failing Even As The Plutocrats Are Indifferent. 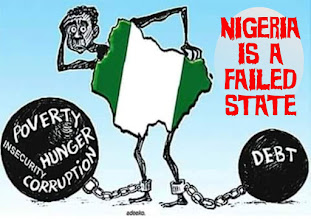 “Plutocracy is a government controlled exclusively by the wealthy, either directly or indirectly. Only the wealthy rules...” - Investopedia Nigeria is an example of a plutocratic system of governance.
In fact, it will be easier for a Camel to pass through the eye of a needle than for a poor man to win an election in Nigeria.
Well, Senate President Lawan, one of the Nigerian plutocrats, stated recently that Nigeria didn’t become failed state under Jonathan, and so, it won’t be failed state under Buhari.
But the statistics on ground say otherwise. Mr Lawan was sentimental when he made that statement. In his head, I believe he knew that all the rudiments of a failed state are present in Nigeria at the moment.
For instance, Governor Obaseki of Edo state stated, recently, that the federal government of Nigeria printed 60 billion Naira as part of the funds it shared to the states and LGAs as monthly allocations.
A country is nearing oblivion whenever it starts printing money to meet its obligations. That country is failing. The printing of money means that Nigeria’s income is unable to meet its commitments.
In fact, printing of money increases money supply, which will raise inflation, as a consequence, will devalue the Naira.
The devaluation of Naira will erode its purchasing power. If this situation is not checked, N30 thousand minimum wage may just worth a packet of biscuits.
Thus, when the citizens cannot meet their immediate needs, frustration will set in, which could add to the already uncontrollable conflicts going on in Nigeria.
There’s no doubt that Nigeria is on the edge of a precipice. Nigeria’s debt is spiralling out of control. People are getting poorer each day. There are all sorts of arms insurrection in every part of the country.
North-east of Nigeria is under the siege of Boko haram terrorists. Bandits are holding sway in the North-west. Fulani ‘herdsmen’ terrorists are terrorising the North-central and the South-west.
And a new phenomenon called ‘the unknown gunmen’ are killing, maiming, and burning security personnel and their equipments in the South-east and the South-south of Nigeria.
Ethnic nationalities in Nigeria are setting up vigilantes. According to the Dictionary, vigilante is “a volunteer committee organized to suppress and punish crime summarily (as when the processes of law are viewed as inadequate)”.
The setting up of vigilantes show that the Nigerian Police have failed to discharge their duties. Soldiers and their sister forces run away from battlefields.
In addition, indigenous militias have taken over Nigeria. People die daily while the Plutocrats are clueless about how to solve the problems.
The plutocrats are indifferent because the Tigers they are riding on still have more poor people to consume.
When all the poor have been eaten the Plutocrats must dare not dismount the Tigers, but they won’t have an alternative, they will become the Tiger’s next meal. Apologies Winston Churchill
Oga Senate President, the last time I checked, failed state is “a state whose political or economic system has become so weak that the government is no longer in control”. Is Buhari’s government still in control of Nigeria?
Indeed, Nigeria is failing but can be salvaged if there’s sincerity amongst the Plutocrats. It is time to “make hay while the sun shines”.
Restructure Nigeria now, create a level playing ground. Stop robbing Peter to pay Paul. Get everybody involved in the business of Nigeria. Dangote alone cannot feed or service the whole of Nigeria.
The Plutocrats should drop sentiments and embrace the fact that all is not well, and so, if they fail to act now, the Nigerian state will fail.