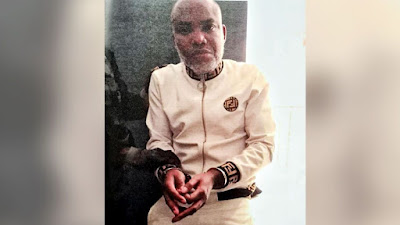 During his television interviews, Barrister Ejiofor (Nnamdi Kanu’s Lawyer) stated that his client (Kanu) was arrested at Kenya’s international airport.
That Kanu was taken to a private residence where he was tortured for 8 days before he was extradited to Nigeria.
Now, was Nnamdi Kanu extradited? The answer is NO. Even Mr Ejiofor himself emphasized that Nigerian government kidnapped Nnamdi Kanu from Kenya.
If the lawyer believes that Kanu was abducted, why does he still say Kanu was extradited. You cannot abduct and extradite at the same time. Kanu was abducted, as simple as that.
If Mr Ejiofor continues to use extradite, he will be unwittingly legitimising the conspiracy to abduct Nnamdi Kanu by the governments of Nigeria and Kenya.
Mr Ejiofor should stop talking and start taking actions. Let him try and understand the meaning extradition and its process. There must be a court order to effect extradition or repatriation, etc.
The following are excerpts of Kenya’s law on the extradition of Commonwealth Countries, which Nigeria is a part of. (Kenya: Extradition (Commonwealth Countries) Act, 1968)

Article 6
(1) “A fugitive shall not be surrendered, or committed to or kept in custody for the purposes of surrender, if it appears to the court of committal, or to the High Court on an application for habeas corpus, or to the Attorney-General,…”
habeas corpus is “a writ requiring a person under arrest to be brought before a judge or into court, especially to secure the person’s release unless lawful grounds are shown for their detention”.
Furthermore, this Article 6(1) suggests that there must a court appearance/process before extradition is granted.
According to Kanu’s Lawyer, he was arrested at Kenya’s airport, transferred to a private residence for 8 days thereafter he finds himself in Nigeria.
This clearly shows that there was no court appearance/process, and that Kenya practically violated its laws on extradition, if the country truly participated in the abduction of Nnamdi Kanu.
Although Kenya’s High Commission in Nigeria denied on record that Nnamdi Kanu was arrested in Kenya, but Kanu was travelling on a British passport. His flight itinerary alone will reveal his last airport of departure, and arrival.
In fact, this denial by the Kenyan High commissioner in Nigeria is a proof that Kanu was not extradited but kidnapped. That is, no Kenyan court ordered the so-called extradition.
Otherwise, why wouldn't a representative of Kenyan government in Nigeria know of any extradition proceedings against Kanu in Kenya?
Moreover, the Kenyan High Commissioner required Nigerians to ask their government where and how Kanu was arrested.
This got me thinking, perhaps Nigeria collaborated with corrupt Kenya’s security agents to kidnap Kanu without the Knowledge of the Kenyan government.
Kenya is as corrupt as Nigeria, “for a few dollars more” Kenyan security agents would kidnap even their mothers and send back to Nigeria.
Further texts of Article 6(1): “A fugitive shall not be surrendered if - ”
(a) the offence of which the fugitive is accused or was convicted is an offence of a political character; or
(b) the request for his surrender (though purporting to be made on account of an extradition offence) is in fact made for the purpose of prosecuting or punishing him on account of his race, religion, nationality, or political opinions; or
(c) that he might, if surrendered, be prejudiced at his trial, or punished, detained, or restricted in his personal liberty by reason of his race, religion, nationality, or political opinions.
Finally, from the little information in the public domain regarding Kanu’s abduction, if Nnamdi Kanu appeared in any court in Kenya, the Mazi Nnamdi Kanu everyone knows would have vehemently fought extradition.
Obviously, Nigerian government knew that a strong lawyer in Kenya would argue on behalf of Nnamdi Kanu that the offence he is accused of “is an offence of a political character”.
And thus, Nigeria decided to take laws into their hands, and kidnapped Kanu.
Hence, Mr Ejiofor (Kanu’s lawyer) should stop talking and start acting. There are chances that Nnamdi Kanu could be returned to Kenya if appropriate pressures are applied.
After all, Mazi Nnamdi Kanu was holding a British passport when he was arrested at Kenya's international airport.
If Mazi Nnamdi Kanu had committed an offence in Kenya, he ought to have been deported to the UK, and not to Nigeria.
Opinion of Doz Ideas
~liberate your mind
Labels: Politics