Biafra Of The Mind Or Biafra Of Land? 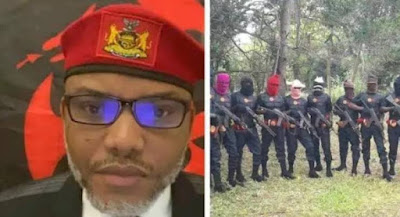 Nigerian soldiers are killing our people in Imo state (Izombe and its surroundings). This is because Imo people have a governor that was imposed on them by the Nigerian Supreme Court, which is controlled by the APC federal government.
Now, Anambra state is scheduled to have its gubernatorial election on 9/November. IPOB have issued orders that there will be no election in Anambra state. If IPOB succeed in stopping the Anambra elections, Ndi-Anambra and Ndigbo in general would face 2 possible outcomes.
1) The APC controlled federal government will have the opportunity to write election results that will give victory to Mr Andy Uba (APC) as the Governor of Anambra state.
2) There would be vacuum and constitutional crises if no Governor was elected to replace Governor Obiano upon the expiration of his tenure.
This would also give the APC federal government the opportunity to declare a state of emergency in Anambra and subsequently appoint an administrator to govern Anambra state.
Whichever of the above situations we (Ndigbo) find ourselves, a new administration would be in place after the expiration of Governor Obiano’s tenure. The choice is ours.
Therefore, in this Anambra election, does it not make sense for IPOB to tactically aligned with a gubernatorial candidate that would tolerate their petulance? Than allow the federal government to appoint an Administrator that would not endure their irritability. And the killing of Ndigbo will continue.
Boycotting or stopping people from participating in the Anambra gubernatorial election will facilitate the enthronement of another Hope Uzodinma in Anambra state. Which will lead to deaths of our youths, disruption of economic activities and destruction of much needed infrastructure in Anambra state.
Moreover, I have wondered why Mazi Nnamdi Kanu and his IPOB haven’t considered the option of seizing political power of the 5 Igbo states? Apparently, IPOB have the sympathy of the people, and the intimidation required to win elections in Nigeria.
Installing the Governors of the 5 Igbo States, and the members of their houses of Assembly would give IPOB the leverage to legally pursue Igbo/Biafra independence. United Nations, USA, EU, etc, only deal with elected representatives of the people.
As it stands, and in the eyes of international law, IPOB do not represent the peoples of Igbo and Biafra. They were not elected to represent anyone. They are political activists.
In fact, a member of the British House of Lords, in one of their sittings, called Mazi Nnamdi Kanu a Political Activist, and not someone seeking Biafra independence.
However, I agree that “self-determination is the right of a people to decide upon its own political status or form of government, without outside influence.” But self-determination is hinged on democracy, the people will have to decide…
Have Igbo people or Biafra people decided to form a new country? IPOB will say that’s the reason they are calling for a referendum. Now, do they have the mandate of the people to demand for a referendum? The answer is NO.
And so, the first step for IPOB is to get the people’s mandate. The only way to do that is for IPOB to control the political structure of the area they want referendum to be held.
By doing so, the houses of the Assembly of the 5 Igbo States would enact laws that will legalize ESN, laws that will ban open gracing, laws that will demand for referendum under United Nations Charter. If they don’t choose this option, Biafra independence becomes a mirage.
When DIM Odimegwu Ojukwu returned from exile, he said that there will not be a physical place called Biafra again. Rather that Ndigbo should have Biafra of the mind. Senator Abaribe recently (May 14, 2021) echoed that sentiment when he said that he preferred Biafra of the mind than Biafra of land.
Biafra of the Mind is the logical proposition for Ndigbo. It is not yet achieved because we have corrupt people as leaders in Igboland.
Again, I call on IPOB to come to the rescue. Takeover the political leadership of Igboland and give us the Biafra of the mind before seeking the Biafra of land that we may not need in the end.
Unfortunately, we have a lot of killings going on in the Igboland today that we don’t know if we are the ones killing ourselves or that the federal government of Nigeria is killing us, as we allege.
Overall, Biafra agitation requires big EYES to see when our enemies are coming. If we don’t have the eyes, we should have the EARS to hear the footsteps of the enemy, or the NOSE to smell their presence. In all, we need Brain and Brawn to prosecute our Biafra agenda.
~liberate your mind.
Labels: Politics