Pres. Buhari: He who pays the piper dictates the tune 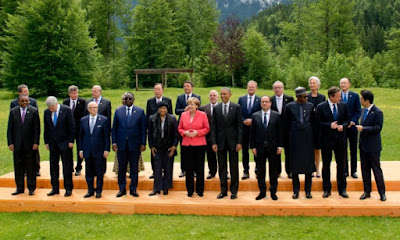 During their discussion, Mr Cameron asked Mr Buhari to come with his shopping list while attending the Group 7 industrialised nations (G7) meeting in Germany.

Pres Buhari has been to Germany and back. He also submitted his shopping list to G7 and as he stated, security was first on his list.

But he didn’t say who would finance the items on his shopping list. Hence, if it is Nigeria that will finance his shopping list, then, it is advisable that Buhari shops around before committing to the G7.

However, if it is the G7 that will fund his shopping list; Mr Buhari should be reminded that; ‘he who pays the piper dictates the tune.’

Moreover, he should be aware of Greek-gift from the WEST. They always want something in return for their gestures.

Although Father Christmas originated from Europe; his presents usually arrive on the Christmas Eve (24th December) but we are just in June.

Besides, it is an open secrete that the WEST, the US in particular, refused to assist Nigeria in their war against Boko Haram terrorists; because former Pres Jonathan refused to surrender the sovereignty of Nigeria to them.

As such, the WEST worked for the emergence of Pres Buhari during the just concluded Nigerian presidential election.

And so, President Buhari is under obligation to inform Nigerians in particular and Africans as a whole, the agreement he reached with the G7 regarding his shopping list.

As it stands, Nigeria is the last hope of Africa towards achieving her total independence. If Nigeria is seized by the WEST; Africa is enslaved forever.

I am hampering on the above because even though Buhari was a former Nigerian military head of state, it appears that he has forgotten the thinking of the WEST.

Apparently, Pres Buhari is out of touch with reality; otherwise he wouldn’t have referred Germany as West Germany. There is just Germany since the fall of Berlin wall in 1989.

Moreover, referring Angela Merkel as President Michelle of Germany is unpardonable because even school children know that the head of government in Germany is known as Chancellor; in addition, there was Chancellor Hitler.

All those people who are manufacturing excuses to dampen Buhari’s inability to grasps situations are deceiving themselves and not Africans. They are hypocrites who will be infuriated if their children should tell them that there’s a country called West Germany in 2015.

Let me conclude by highlighting one of the lyrics of Fela Kuti, a great African musician, Philosopher and Spiritualist.

According to Fela, when the Western countries want to control Africa, they’ll first look for an African with low mentality and put him on a high position.

I hope they have not found one in Muhammadu Buhari.
Labels: Politics