Bola Tinubu: When you lose the argument; Insult your opponent. 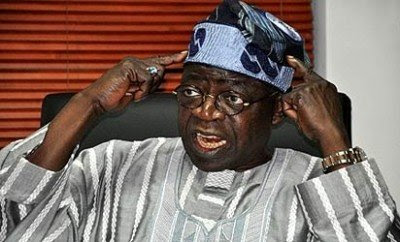 It is always difficult to be subservient when you are used to dishing out orders. Mr Bola Tinubu, the acclaimed leader of the All Progressives Congress (APC) is used to having his ways, but it is not so anymore.

President Buhari has submitted the list of his proposed Ministers to the Senate for clearance. And Mr Fashola was given the slot for Lagos state, apparently against the wishes of Mr Tinubu.

Tinubu practically ‘owns’ Lagos state and thus, determines who gets what, in terms political appointments and other privileges.

And considering that Tinubu has a visibly strained relationship with Fashola, under that circumstance, he wouldn’t have submitted Fashola’s name for a federal appointment.

Hence, when a Nigerian newspaper alleged that Tinubu is trying to connive with Mr Saraki, the Senate President, to undermine President Buhari; that assertion may not be pointless.

However, Saraki’s denial of the accusation was very simple. He stated that Tinubu has been at variance with him (Saraki) since he was elected the Senate President. And therefore he has nothing to do with the allegation.

But Tinubu’s own refutation came as a six-page statement, which was a verbal attack on Saraki.

It beats anybody’s imagination why Tinubu would attack Mr Saraki in order to deny an allegation that did not originate from the senate president.

And by not attacking the newspaper that made the accusation but Saraki, Tinubu betrayed his emotions. He is indeed frustrated with President Buhari’s appointments.

For the first time in his political career, Tinubu is unable to say who will represent Lagos state. His ego has been bruised. And the worst of it all, there’s nothing Tinubu can do about it.

Unfortunately, Buhari has nominated Fashola on behalf of Tinubu and if he (Tinubu) doesn’t like it, the president will throw the books at him.

In all, Tinubu has lost the argument with Buhari and since he dares not insult Buhari, well, there’s Saraki - a transferred aggression.

At last, the Lion of Bourdillon has been tamed.
Labels: Politics