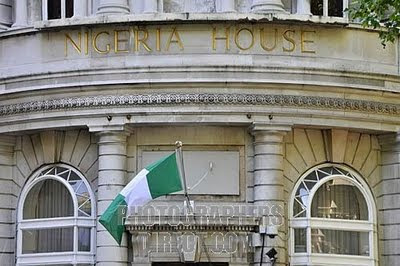 In 2010 at the Nigerian High Commission (Embassy) London, a Camel passed through the eye of a needle while Doz was trying to renew his passport. A process that ought to have been simplified was so complicated that he wondered if Nigeria was a country made in hell.

First of all, Doz completed an online application form and made a payment of $65. Next, He waited (appointment) for 5 months to be interviewed for the new passport.

Besides, there was another mandatory payment of £20 by postal order made out in the name of the Embassy.

On the day of his appointment, Doz arrived at the Embassy at 6am on the advice of his friend who has experienced the Embassy show. Even 6am was not earlier enough because about 45 people have already formed a long queue.

And the doors of the embassy will open by 9am; another 3 hours to wait.

Everybody was standing deadpan in the early morning cold; waiting to go into their 'Nigeria house'. It’s pathetic how Nigeria treats her citizens. What’s the point being a Nigerian citizen, Doz pondered?

At about 9.15am, a security officer emerged from the Embassy and started dishing out his inaudible instructions. He flipped through everyone’s documents and those with incomplete documents were not allowed into the building - after standing more than 3 hours in the cold.

Inside the building, it was a dungeon; an unventilated basement office. And there were not enough seats for all. Most people leaned on the wall while waiting for their numbers to be called.

The frustration in the dungeon increased as the crowd continues to swell. The worst of the frustration was the cries of the children who were visibly tired and irritated.

Hence, Doz walked to an official and pleaded with him to attend to these children and their families so that the rest of the people can wait in peace. At least that’s what’s obtainable everywhere – families with children first.

The guy retorted; do you want to teach me my job? NO! Then go and seat down. The dialogue ended - such a rude fellow.

As there was not even a mobile network to while away the time on the internet, etc, Doz tried to go outside to refresh and perhaps find something to eat. The security man told him that he won’t be allowed back into the building if he goes out.

Well, after 4 hours, it was Doz’s turn but the drama at the Embassy wasn’t about to end. The cashier flipped through his documents and became angry: ‘you didn’t pay for this; this is a change of name’. She threw the documents back at Doz.

Madam; please calm down and explain. She said ‘your wife’s old passport is in her maiden name, if she wants the new passport to be in her married name, then, she has to pay for change of name and it is £40 by postal order.

Now, it wasn’t about the money anymore but how to get the postal order. It was about 1pm; 7 hours since Doz came to the Embassy. That will mean leaving the building in search of a post office and perhaps return when the office has closed.

As if she read Doz’s mind, the cashier pointed to a corner, you can buy the postal order over there. Phew – what a relief. And there was a human post office with her exorbitant fees that only those in bondage will pay without complaining. And Doz didn't complain.

Ironically, Doz paid $65, which was about £45 for a new passport booklet. Then, paid £40 for a little stamp at the back of his wife's old 'useless' passport that read; 'the name of the bearer of this passport has changed to...' Unbelievable!!!

Thereafter, it was first floor to take photos and biometrics, which took not more than 5 minutes. Then, why waste 7 hours for a process that lasted for 5mins. Nigeria is a conundrum.

5 years have gone since the above encounter. And that passport has expired waiting for renewal. Doz is depressed on the thought of going back to the Nigerian High commission to renew his passport.

But, why don’t the Nigerian government extend the life span of its passport to 10 years like most countries. At least, it will save people from the sort of suffering and humiliation they go through in search of a Nigerian passport.

Anyway, Doz picked himself up and returned to the starting point of passport renewal – completing an online application form. Unfortunately, there’s a depressing information on the Embassy’s website –

And Doz needs 32-page passport booklet. As there’s no time limit to wait according to the Embassy, they have practically exiled Doz from Nigeria.

In reality, these people want to arm-twist Nigerians to pay for the 64-page passport that is more expensive than the 32-page option ($135 + £20 postal order) and which they don’t need.

In fact, most people all over the world apply for 32-page passport.

Obviously, the country is run by insane people and that’s why Nigerian Embassy can freely tell Nigerians that they don’t have passport booklets. What an embarrassing statement written online for the whole world to read. Anyhow, I have advised Doz that he can board a flight with his expired passport to Nigeria.

And if the immigration stops him; simply tell them that you came to renew your passport since the Embassy in London has no passport booklet.

Alternatively, since Doz is from the former eastern Nigeria, he can apply for a Biafran passport, which cost just $25.

In all, that will liberate Doz from the perpetual dilemma of I can’t renew my Nigerian passport.
Labels: Life