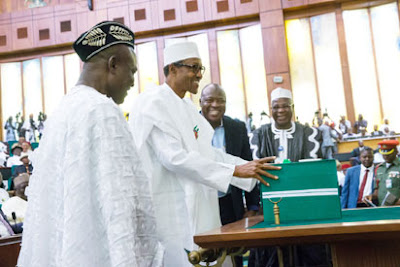 Budget literally means estimates of income and expenditure for a given period – usually annually. Budget is not limited to governments and corporations. A budget can aid an individual to live within his/her means.

However, the preparation of a budget is extremely important and compulsory to governments and corporations. It helps them to appraise their financial targets. It also presents their financial directions to shareholders and citizens respectively.

With the above in mind, those tasked with the preparation of a budget ought to get it right. But that seem not to be the case with the 2016 Nigeria’s annual budget. The figures are not adding up, the trial balance is not balancing while accounting double entry rule is non-existent.

But who prepared the budget is a question begging for an answer. The presidency is blaming a ‘budget mafia’ within the ministries for the discrepancies contained in the budget.

If that’s the case, when did the ‘budget mafia’ come into existence? Were they there during the administration of Pres Jonathan? If they were, why didn’t the National Assembly discover their fraud?

Perhaps, the ‘budget mafia’ were very good at their fraud during Jonathan’s administration but now lost their footing due to Buhari’s body language against corruption. Fairytale!

A corrupted budget has always been the means by which successive Nigerian administrations have siphoned millions out of the country.

And that’s why some commentators were quick to label the 2016 Nigeria’s budget – a budget of corruption. In my opinion, I’ll rather call it a budget of incompetence.

It is a budget of incompetence than corruption because it is still the same civil servants who have been involved in preparing previous budgets that supposedly prepared the 2016 budget.

So if the ‘budget mafia’ within the ministries have prepared undetected fraudulent budgets in the past; why were they careless with the 2016 budget?

The only possible answer to the above question is perhaps, the civil servants were not involved in the preparation of the 2016 budget in the first place.

The budget was possibly prepared by pres Buhari’s chief economic adviser and other 13 members of his economic team. Please don’t ask me who they are.

Let’s recall that the first request from the Senate by president Buhari was the approval of 15 advisers. Up till today with the exception of Femi Adesina, media adviser to the president, nobody knows who the other 14 advisers are. And they are paid by tax payers who don’t even know who they are paying.

These unknown 14 advisers should be held responsible for the budget of incompetence. They were the people who were in charge (and are still in charge) before pres Buhari assigned portfolios to his ministers on 11/Nov/2015.

By 22/Dec/2015 pres Buhari presented his annual budget to Nigeria’s National Assembly; barely 6 weeks from the day he assigned portfolios to his ministers.

Now the pertinent question; is 6 weeks enough time for a minister to prepare the budget of his ministry?

It is perceptible that these ministers didn’t even see the 2016 budget until they appeared before the Senate to defend their respective department’s budget.

I mean, if it’s the duty of a minister to defend the budget of his department, common sense demands that the same minister should be involved in the preparation of that budget? That wasn’t the case with Buhari’s ministers.

And that’s why they have been disowning the figures contained in their respective budgets. They simply didn’t know how and who prepared the 2016 budget. They are just ministers on paper.

Of course they have to deny the budget lest they are labelled corrupt and jailed by Buhari’s police. Unbelievable; what a show of shame never witnessed in the history of Nigeria's budget defence.

Obviously president Buhari knows who prepared the budget – his 14 wise men and women (economic team). And by now it has dawned on him that they are incompetent. They have embarrassed the president.

Going by the pattern of Buhari’s appointments, these 14 wise men could all be northerners. However, somebody should tell president Buhari that economic matters are best left in the hands of southerners.

Should I say wise men always come from the East.
Labels: business