Happy Easter: Jesus died to save the world; do you believe? 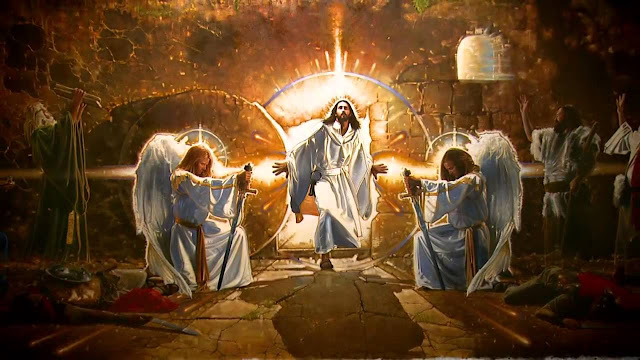 There were two fundamental characters in the Jewish mythology – Judaism; Moses and Jesus. The Jews accepted and revered Moses but rejected Jesus. Moses was a lawgiver that gave Jews the Torah – the five books of Moses. And Jesus to them was an imposter that came to destroy the Law of Moses.

But did these two men ever exist or were they myths?

According to Prof. Ze'ev Herzog of the Department of Archaeology and Ancient Near Eastern Studies at Tel Aviv University, in his book "Deconstructing the Walls of Jericho", states as follows:

“Moses could not have parted the Red Sea, not only because it violates the laws of physics, and there was no Moses, but because there was no Red Sea to cross, since Egypt and Israel have a common land border”.

I looked up the maps and in fact, Prof. Herzog assertion makes sense. More so, most Archaeologists agree that Moses never existed.

Consequently, if Moses didn’t exist what of Jesus; did he exist? The same archaeological evidence that suggests the non-existence of Moses emphasizes the existence of Jesus.

In addition, Cornelius Tacitus (55/56 – c. 118 C.E.) who “was a Roman senator, orator and ethnographer, and arguably the best of Roman historians” mentioned Christ, and Christians whom he hated, in his biography of Emperor Nero written c. 116–117 C.E.

According to Tacitus, in 64 C.E, Nero was suspected of burning a part of Rome that he wanted to site a building project. And in order to quell this suspicion, Nero shifted the blame to Christians whom he “punished in the most unusual ways..."

Tacitus continued, Christ whose name was associated with Christians “was executed by the Roman governor of Judea [Pilate 26 – 36 C.E.]; - during the reign of Emperor Tiberius [14 – 37 C.E.]”.

This is, should I say, a direct account that Jesus was human while confirming the thoughts of most New Testament scholars that placed the death of Jesus c. 29 C.E.

Moreover, apart from the Bible, the recognition of Christ by a foe (Tacitus) can only suggest that indeed, Jesus the Christ existed.

Nevertheless, the Jews accepted Moses who never ‘existed’ but rejected Jesus who existed. And that’s why the bible stated in John 1:11, “He [Jesus] came unto his own, and his own received him not.”

Jews still rejected Jesus even though he assured them that he didn’t come to change the Prophets and the Laws (Judaism) but to fulfil them.

As Jews rejected one of their own, and since nature abhors vacuum, some people adopted Jesus. They called themselves Christians and started recreating what Jesus stood for.

For instance, Jesus said he didn’t come to make new laws or create a new religion but these people created Christianity. If Christians are truly Christ-like, they should be practising the religion of Jesus – Judaism.

And Jesus’ observance of the feast of Passover shouldn’t have been renamed the last supper.

Furthermore, Christians are propagating that God sent His only son - Jesus to die so that the whole world would be saved. Let me ask; does God need to sacrifice His son in order to rid the Earth of its imperfections? I don’t think so.

That will amount to human sacrifice that was the practice of ancient Africa, which Christians spoke against. Moreover, the Omnipotent, Omniscient and Omnipresent God has the power to change anything if He wishes.

However, for Jesus to die and save the whole world, he must have come for the sake of the world. Yet, according to Jesus, “…I am not sent but unto the lost sheep of the house of Israel” – Matthew 15:24.

Jesus made that statement when his disciples asked him to respond or send away the Samarian woman. Therefore, if Jesus couldn’t help the Samarian woman because she wasn’t an Israeli how then did Jesus come to save the world?

Or is Samaria not part of the world? If Jesus didn’t come for the Samarian that was seeing and talking to him, did he then come for my forefathers that lived in West Africa and neither saw nor spoke with Jesus?

All the same, Europeans hijacked and twisted Jesus’ mission to suit their ulterior motive of dominating the world. Jesus became their god and god to those they conquered. And Christianity suddenly became the religion of the world.
They started manipulating the words of Jesus. For example, Apostle Paul was quoted in 1 Corinthians 15:4 that “he [Jesus] was buried, that he was raised on the third day according to the Scriptures.”

Conversely, the scriptures according to Matthew 12:39-40 quoted Jesus to have said “an evil and adulterous generation seeks after a sign, and no sign will be given to it except the sign of the prophet Jonah".

Clearly, what Jesus said was that he will be dead and in the grave for 3 days and 3 nights. But Paul changed it to; “Jesus was raised on the third day” to coincide the resurrection with Sunday - Christians’ holiday; the day Romans previously worshipped their sun god.

Sunday worship is another deviation from God’s commandment to keep the Sabbath day holy, which begins sun-down Friday to sun-down Saturday.

However, going by Jesus’ statement, Christ resurrected on a Monday - 3 days and 3 nights after his death on a Friday, before the commencement of the Sabbath day.

It is very clear as quoted by Jesus that he didn’t come to save the world but the Jews. Moreover, the 5 books of Moses were written for the Jews and so do other books in the Old Testament of the bible.

And if you are not a Jew, you are a gentile. Even the word gentile can be construed to mean infidels – which is the name Muslims gave to those they term unbelievers.

The bible, most of all, noted that God referred to the Jews as the children of God - the chosen ones. Thus, if God sent Jesus to die and save the world; then, it must be the Jewish world than the rest of the world.