Niger Delta to President Buhari: it’s your turn to rule and our turn to bomb 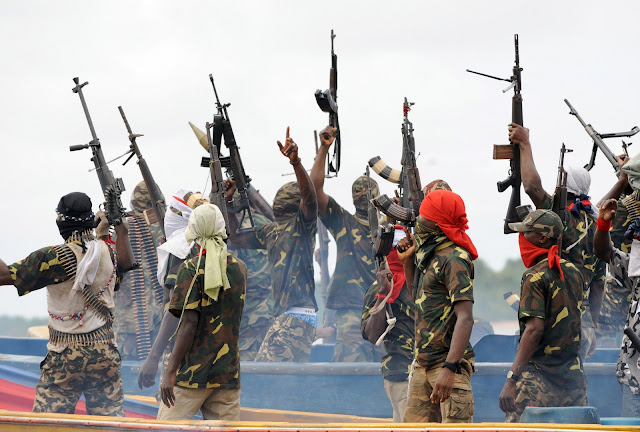 Nigeria as a country is a puzzle. Since 1914 when the British colonialists coupled the different tribes and nations to form Nigeria, solving the puzzle is growing more tedious than envisaged.

Ever since, these tribes and nations see the country from their tribal and national perspective. To Igbo people, the country is a market place where they trade through its length and breadth even though they face hindrances while doing so.

Whereas the Niger Delta people say they own the goose that lays the golden egg and that without them there won’t be Nigeria; the born to rule (Sokoto Caliphate) of Northern Nigeria believes that Nigeria is its fiefdom.

And to the Yoruba, “Nigeria is not a nation. It is a mere geographical expression. There are no ‘Nigerians’ in the same sense as there are ‘English,’ ‘Welsh,’ or ‘French,’ The word ‘Nigeria’ is a mere distinctive appellation to distinguish those who live within the boundaries of Nigeria and those who do not” - Chief Obafemi Awolowo, 1947.

To buttress Chief Awolowo’s assertion, in 1948 Alhaji Sir Abubakar Tafawa Balewa said that “…Nigerian people themselves are historically different in their backgrounds, in their religious beliefs and customs and do not show themselves any signs of willingness to unite … Nigerian unity is only a British invention.”

As the people themselves didn’t believe in the “British invention”, which became “a mere geographical expression”; ‘the centre could not hold’ anymore, as a result; “there was a country” according to Prof Chinua Achebe.

The unease that existed since the British government created an almost a failed country is about to ruin any hope that is left of Nigeria. There’s no trust amongst the people that inhabit Nigeria.

As such, who becomes the president of Nigeria is always seen from nationalistic standpoint. It is our turn to govern is the mantra that emanate from the nationalities that make up Nigeria.

In 2010 and by providence, Mr Goodluck Jonathan became the President of Nigeria. The former President who was from Northern Nigeria and whom Mr Jonathan served as the vice has just died.

However, in 2011 when Jonathan wanted to contest the presidential election for the first time, the northerners opposed his ambition. They said that they are yet to complete their turn because President Yaradua died before completing his tenure.

The activities of Boko Haram intensified. Suicide bombing became daily occurrence. Jonathan’s Nigeria was under siege simply because he thought he was a Nigerian who has a constitutional right to contest the presidential election. He was wrong; Nigeria was a country.

Fast forward to 2015; it was time for another presidential election. Again Jonathan was in the tick of it. Prior to this time Buhari has warned; “if what happened in 2011 (alleged rigging) should again happen in 2015, by the grace of God, the dog and the baboon would all be soaked in blood.’’

Eventually, President Jonathan conceded the election before the final result was announced, perhaps to forestall the dog and the baboon from soaking in blood. He congratulated Buhari.

And thus, the Fulani and by extension - the northern Nigeria has regained their turn to rule Nigeria through intimidation. But in all their shenanigans they forgot the golden rule; the measure you give is the measure you receive.

Well, the people of Niger Delta want to pay back Buhari in his own coin. They want to kill the goose that lays the golden egg, which may lead to the dog and the baboon soaking in blood.

Meanwhile, it was reported that Jonathan has gone on exile to Ivory Coast. But why do Biafrans run to Ivory Coast for refuge? Remember it was the same Ivory Coast that DIM Emeka Ojukwu took refuge after the fall of Biafra.

Anyway, Jonathan called the newspaper that carried the news that he’s not on exile. He told them that he’s resting in Abidjan and he’s going to be there for some time.

No shaking! Jonathan can’t run. If they touch Jonathan; Nigeria will cease to be oil exporting country. Moreover, Jonathan has the evidence of the skeletons that Nigeria’s past leaders left in their respective cupboards at Aso Rock Presidential Villa? He is in Ivory Coast for his safety.

I mean, if your name is Goodluck Jonathan and you have successfully ridden your luck; why should you stay around for the Badluck that is associated with your second name to befall you.

Remember, in the Bible King Saul and his son Jonathan died at the war front so that David would become King. Jonathan is a smart guy; he reads his bible and that’s why he’s ‘resting’ in Abidjan.

Note: “since 1914 the British Government has been trying to make Nigeria into one country, but the Nigerian people themselves are historically different in their backgrounds, in their religious beliefs and customs and do not show themselves any signs of willingness to unite …” Tafawa Balewa

In all, the best option is to follow the 1964 advice of Dr Nnamdi Azikiwe: - “It is better for us and many admirers abroad that we should disintegrate in peace and not in pieces. Should the politicians fail to heed the warning, then I will venture the prediction that the experience of the Democratic Republic of Congo will be a child’s play if it ever comes to our turn to play such a tragic role”.
Labels: Politics