The Shenanigans of Apostle Paul 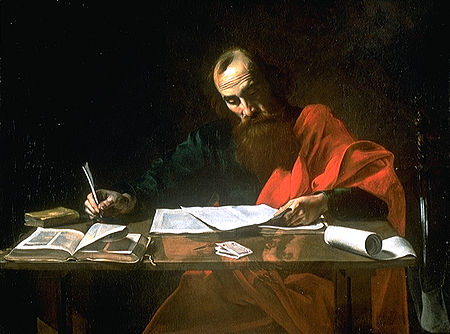 According to Matthew 16:18, Jesus told Simon; “And I say also unto thee, that thou art Peter, and upon this rock I will build my church; and the gates of hell shall not prevail against it” - in other words, nothing will stop Peter from being the head of Jesus’ congregation. That was when Simon became Peter.

However, it could be argued that Jesus’ wish concerning the leadership of his congregation did materialise. Peter became the first Pope (head) of the Roman Catholic Church; which literally was the first organised church in the world. But, is it not surprising that Peter who was the closest to Jesus didn’t write one of the gospels? Two books (1st and 2nd Peter), which have a combined number of 8 chapters were the only contribution Peter had in the Bible.

Although there was a gospel according to Peter, but the Roman Catholic Church labelled it apocryphal. The Catholic Church didn’t buy the story contained in the book, especially where it stated that Jesus was crucified under Herod Antipas instead of Pontius Pilate.

If Peter didn’t contribute a lot to the bible, Saul who later changed his name to Apostle Paul wrote majority of the books in the New Testament. About 14 books were attributed to him. Paul became the face of Christianity. His teachings became the bedrock of Christianity. Though Peter was the head of the Church, but it was Paul’s teachings that rule the Church.

Now, Paul has taken over the Church of Christ through the back door. Thus, it is pertinent to ask; whose messenger was he; Jesus or the Romans? Paul said he was of Jesus because he had an encounter with Jesus on his way to Damascus, ironically, to persecute the followers of Jesus.

Let’s examine what happened to Paul on his way to Damascus. The Acts of Apostles described Paul’s conversion, but the author of the book is unknown. Some scholars have suggested that it could have been written by Luke or perhaps, the Romans wrote it to further their grand plan of converting the Jews.

Thus, in Acts 9 Paul saw lightening that blinded him, and heard a voice; Saul, Saul, why are you persecuting me? Who are you Paul asked? I am Jesus was the answer. The narrative was smooth until Acts 9:7. The author said in this verse, “And the men [who] journeyed with him stood speechless, hearing a voice, but seeing no man.”

Then in Acts 22 while defending himself amongst the Jews, he told the story of his conversion. His version of the conversion matched the version of the Author of the book of Acts of Apostles. But there was discrepancy in verse 9 – “And they that were with me saw indeed the light, and were afraid; but they heard not the voice of him that spake to me.”

While the Author of Acts said that Paul’s companions heard the voice; Paul said that they did not hear the voice. Even when Paul was defending himself before King Agrippa, in Acts 26:14; Paul didn’t say if his companions heard or saw anything. But this time all of them fell on the ground unlike the previous 2 accounts. The possible reason for these contradictions - Paul was acting the Romans' script.

Well, Paul was a Roman citizen of Jewish descent. He was a Pharisee. He knew the law before his purported conversion. He didn’t meet Jesus when he was on earth and so Paul’s teachings were based on his knowledge of the laws of Moses. These attributes made him a perfect tool in the hands of the Romans to continue with their efforts to convert the Jews.

If Paul was of Jesus, he wouldn’t have deviated from the views of Jesus. Jesus said in Matthew 5:17 "Do not think that I came to abolish the Law or the Prophets…” which is the meaning of Judaism (Law and Prophets). But after his supposed conversion, Paul started questioning Moses law and by extension questioning God since the scriptures said that Moses received the law from God on Mount Sinai.

In Galatians 5:2 Paul said, “Mark my words! I, Paul, tell you that if you let yourselves be circumcised, Christ will be of no value to you at all.” The same Paul circumcised Timothy in Acts 16:1-3 so that he can go with him to the areas populated by Jews. Timothy’s mother was Jew, but his father was Greek and the Jews knew about him (Europeans do not practice circumcision till today). Paul said one thing in Galatians 5:2 and did another thing in Acts 16:1-3. Besides, God instructed Abraham to circumcise himself and his household and to continue doing likewise. So, why was Paul trying to challenge the word of God?

Again, in Romans 14, Paul wrote extensively about the eating of Pig’s flesh (Pork). In verse 14, Paul said “I know and am persuaded in the Lord Jesus that nothing is unclean in itself, but it is unclean for anyone who thinks it unclean.” Paul’s assertion goes against the Law of Moses – Deuteronomy 14:8; “And the pig, because it parts the hoof but does not chew the cud, is unclean for you. Their flesh you shall not eat, and their carcasses you shall not touch.”

It is very apparent that Apostle Paul was the creation of the Romans in order to lure Jews out of their Judaism. Using a Pharisee to condemn Judaism was a deft move by the Romans. But they lost the plot as the Jews refused to abandon their religion/tradition for Christianity.

Nevertheless, the European missionaries used the same strategy as with Paul to convert Africa, sub-Sahara Africa in particular, to Christianity. When they came to our villages, they looked for strong opinionated individuals, and convert them. These individuals will do the rest of the job for them.

Just like Paul, they will start by condemning the tradition of the people. Including how they will end up in hell fire if they don’t accept Jesus as their Lord and personal saviour. New converts were baptised and have their names changed to ‘Christian’ names. This deception is still going on till today throughout Africa.

Clearly, Peter didn’t corporate with the Romans because he was a core Jew who didn’t eat/touch pork or ate with the gentiles, which caused friction between him and Paul. This was probably why they labelled Peter’s gospel apocryphal, but his epistles passed their canon test. That didn’t make sense considering that Peter’s gospel must have been written before his epistles.

Overall, it didn’t matter whether or not Peter cooperated with the Romans; they found a willing accomplice in Apostle Paul. The Jews are very prosperous today because they didn’t abandon the traditions of their forefathers. As for Africans, the future will remain bleak until we retrace our steps back to the traditions of our ancestors.