Blasphemy: an unforgivable sin unlike Adultery - Apostle Suleiman on my mind 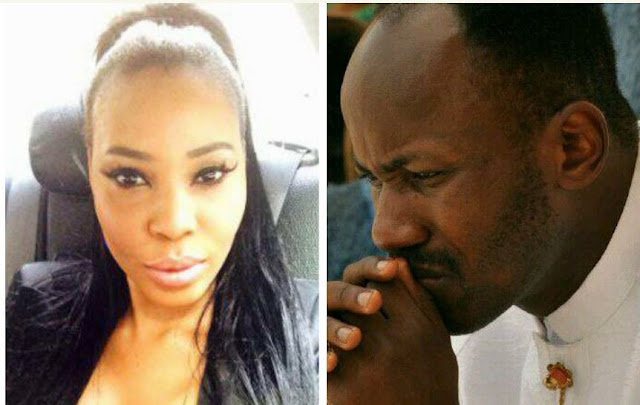 In 2005, while having my lunch at a cafeteria in Umuahia, Abia state, Nigeria, a well dressed young man approached me. He informed me that he had a message from God to me. Okay, let me hear the message. He introduced himself as a Pastor, and that God told him to tell me to provide some money to develop his ministry. After recovering from disbelief, I managed to ask him, what do I call that money, investment? He replied, you can call it that. Oh sorry brother, I don’t do that kind of investment.

Before he could add another word, I reminded him that the only time Jesus got angry, as reported by the bible, was when he saw some people trading in his father's house. Thus investing in your ministry may be construed as trading in God's house, which may be counted as blasphemy to me – using the name of God in vain.

Moreover, investment comes with reward, and so what will be my reward from investing in your ministry? He said my reward will come from heaven. Will it come directly to me or through you. He said directly to me. Okay, that means the contract is between God and I, and since you hear from God, tell Him that I didn’t believe you. If God is actually serious about this investment ask Him to talk to me directly. The foolish Pastor said to me, perhaps God has been telling you, but you didn’t hear Him. I became enraged at this point, so you can hear God; but I can't hear God. I told him to leave or I will get some boys to violently move him.

But for the benefit of the doubt let's assume that these 'men of god' speak with God. Thus they must have satisfied the conditions precedent to hearing God. In Matthew 5:8 Jesus said "Blessed are the pure in heart, for they will see God." The word – pure is Katharos in Greek, and it basically means blameless. In other words, if you are blameless you can see God, and if anyone can see God, talking to Him will be ordinary.

Now, let's assess if any man or woman can stand the test of pure (blameless) in heart to qualify him or her to see and talk to God. I doubt, because of the sin of adultery – one of the ten commandments, which everybody is guilty of. Before you try to exonerate yourself from the sin of adultery – hear Jesus. "But I tell you that anyone who looks at a woman lustfully has already committed adultery with her in his heart" - Matthew 5:28. It is not when you performed the act of adultery that you sinned, but when you look lustfully. Who doesn’t look lustfully at a woman or a man? Perhaps that’s why it is said that all have sinned...

However, adultery is the least of all the sins amongst the ten commandments. It is my opinion based on the understanding that nobody will go to heaven if adultery becomes the crux of judgement on the last day. In fact, most of the important people that worked for God in the bible had wives and concubines. And there's nowhere in the bible that any of them was punished due to adultery.

Nevertheless, David was punished not because he took someone's wife, but because he more or less killed the woman's husband – Uriah. After all, Bathsheba – Uriah's wife later had a son (Solomon) for David who succeeded him.

Nonetheless, blasphemy and adultery are two sins sitting on the extreme of each other. The sin of blasphemy is unforgivable while adultery is forgivable.

Hence those Pastors who understand the rules of the game will rather sleep with a woman than stop at looking at her lustfully, since both mean the same thing. And so they will sleep with the most beautiful women, including married women, who attend their Churches. This class of Pastors also try to avoid blasphemy. Instead of saying God told them, they will say Jesus told them. These Pastors know that blasphemy is using God's name in vain and not Jesus' name. No matter what anybody says, Jesus is not God and this class of Pastors know so.

Conversely, there are Pastors who don’t know or chose to ignore the meaning of blasphemy and adultery, and carry on as if it is alright to use the name God in vain or sleep with all the beautiful women in their churches. One of such 'man of god' is Apostle Suleiman Johnson.

Apostle Suleiman has recently presented himself as the defender of Christianity in Nigeria. He picked up a fight with Gov el-Rufai of Kaduna state when some Fulani Muslim herdsmen slaughtered some Christians in southern Kaduna state. The Apostle even claimed that God told him that Gov el-Rufai will die. The Gov is still alive, obviously God didn’t say so to the Apostle. He used the name of God in vain – Blasphemy.

In addition, Apostle Suleiman ordered his congregation to defend themselves against Fulani herdsmen by killing them. Nigeria's authorities tried to arrest him for incitement but failed. Suleiman boasted that 'heaven' will fall if he's arrested. The authorities chickened out, but the war declared by Apostle Suleiman has only started.

As the case may be, Apostle Suleiman started a war by neither knowing the enemy nor himself. His enemy is the Nigeria's statecraft while the Apostle is an adulterer simply because he looks lustfully at women. The statecraft knows itself and knows Apostle Suleiman very well. Besides if the statecraft can't arrest the Apostle, it can at least inform the Christendom that their defender has some bedroom issues to settle, and it went to war.

And suddenly, a woman has appeared from Canada describing in details her sexual relationship with Apostle Suleiman. Our Apostle has denied the accusation. And other women are coming forward, including the actress he gave a Mercedes Benz 450 as a gift.

The Apostle can deny the allegation of adultery till thy kingdom come, it doesn’t matter because only him and his accuser know the truth, although we all look at women lustfully, and we know that God will forgive us.

But Apostle Suleiman's major concern should be using the name of God in vain. When God wants to punish a man for the sin of blasphemy, He will bring him down through the least of all sins - Adultery.
Labels: Politics Religion