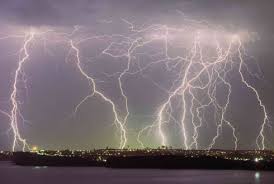 It was hurricane Harvey, followed by hurricane Irma, and on its way is hurricane Jose, all originating from Atlantic Ocean.

In addition, some stubborn slaves, mostly Igbo slaves, who couldn’t bear being forcefully taken to Americas, equally threw themselves into the Atlantic Ocean.

Though these two categories of slaves had been forced to accept the bible and accept Jesus as their lord and saviour, but the Christian god of the Europeans neither heard their cries nor saved them from drowning in the Atlantic Ocean.

But AMADIOHA deity, the god of thunder and lightening of Igbo people of West Africa heard their cries and had never forsaken them since then.

And so, every time the voices of the drowned slaves resonate, sea turbulence sends devastation through the transatlantic slave trade route to the Americas.

Don’t get me wrong, hurricane is not a new phenomenon. In 1502, Christopher Columbus encountered storms during his voyage to the ‘new world’.

At Hispaniola - present day Dominican Republic and Haiti, the natives warned him of an approaching bad storm they called “horrible tempest” or “Huracan”. So some people were already settled in their so called “new world”.

Anyway, the Governor of Hispaniola refused Columbus shelter. Perhaps he didn’t want Columbus to know that he was about to send a “treasure fleet” filled with gold and slaves to Spain, as observed by Columbus.

This means that slaves were already in the Americas before the arrival Columbus. And of course the gold was from Africa. Thus, it will be hard not to believe that AMADIOHA was the cause of the “horrible tempest” the locals reported.

Furthermore, Scientists are baffled by the 3 successive hurricanes (Harvey, Irma and Jose) hitting the Americas. They have never seen anything of such and are yet to figure out what’s happening.

Well, let me give the Scientists a clue what’s happening. President Trump’s bigoted alliance with the white supremacists against black Americans and other minorities has stoked the spirits of the drowned African slaves in the Atlantic Ocean.

And AMADIOHA is reacting violently to the cries of the dead African slaves by sending “horrible tempest” to the Americas.

SOLUTION:
Africans have warned United States that the gods (AMADIOHA etc) must be appeased, in addition to paying reparations for the devastation meted to Africa. And it appears the worst is yet to come – to be forewarned is to be forearmed.
Labels: Religion